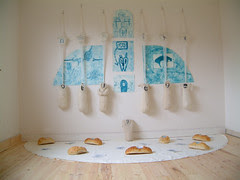 Final version of the ARAN installation
Originally uploaded by ainesse.
This is what I have been working on since January February and WHY I have not been blogging. It has been hard work especially getting going . I initially involved myself in all sorts of material experiments including among other things wax and pyrography - neither of which has been used in the installation here but I will certainly return to these later.
I also considered using digital print on aluminium but then when I found out how much the company wanted to just do my trial proof _ I thought they were being greedy - such a shame as the quote they had given me for doing ten A3 size images wasn't too bad. They wanted about half of that amount just for the initial proof !!!

Anyway here is the piece - its called Aran and I am just working on the final 'refinements at the moment.

I have been keeping a sort of studio log on my new Flickr account which is where clicking on the heading with this image will take you.
I will soon post the statement that goes with this installation hereon my blog.
Posted by Aine Scannell at Tuesday, June 26, 2007 2 comments