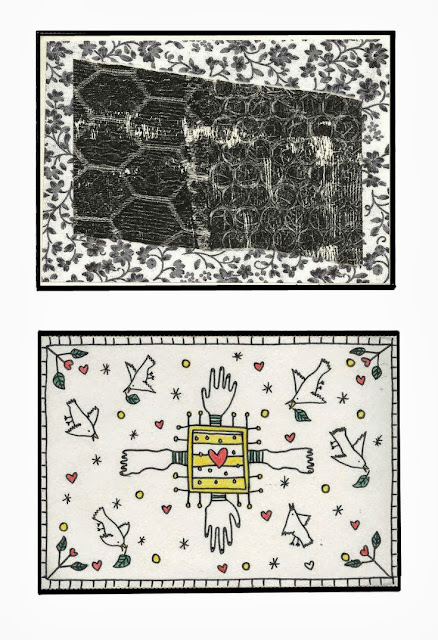 I first became aware of this project in late 2009, I seem to remember that I saw a notice about it on Artists Books 3, which is a Ning site - set up as thee BookArt nerds social network/ showcase/resource etc etc etc.  It's a fantastic website - if you have never visited  - you will see some AMAZINGLY wonderful pieces of art on there.
The original announcement to participate said that the format would be a postcard which had another two postcards attached (using a concertina fold and perforation).  These would be sent to the participant by the initiator/curator of the project Helen Allsebrook.   who at the time was based at C.F.P.R / University of the West of England, Bristol. The project ended up with a total of 240 participants from more than 13 countries.  It was also exhibited at Univ.West., England. 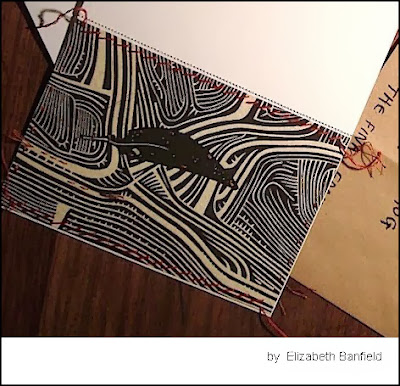 I like Elizabeth Banfields work (that's her contribution above) Have a look at her website - lots of interesting stuff to see.  Participants were allowed to use any media or subject, so there was a fair amount of collage which can be fun to use for quick one off fun things like mail art projects. I participate in them every now and again if the theme appeals to me or the venue/location. 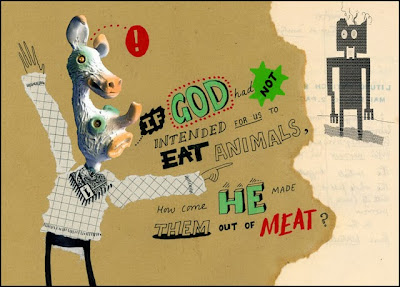 There was no theme and the idea was that "Artist 1" ( I was the first person in my postcard concertina)   creates some artwork on their allocated section and then posts it along - to the next 'allocated designated artist number 2" in one of the envelopes provided.  Thereafter it was posted on to participant number three. After all three blank boxes had been filled the card was to be returned to the base i.e., Helen Allesbrook, back in the UK.

The thing is though that I forgot to take a scan of the postcard I made !!! I also could not find it by going through the images on the website which isn't a straightforward genre of website.  I don't know do they call that kind of website where the images keep going by on a kind of slide carousal "flash based' ??

So if you were that person i.e., on my concertina postcard  ??  then please do get in touch as it would be nice to see the finished postcard collaboration !!

So there you are - a bit late doing a post about it - but there are so many things I do,  that don't make it on here.  This was one of the many 'drafts' on my dashboards post list - I'm sure all you other bloggers out there will have some of your own ??. 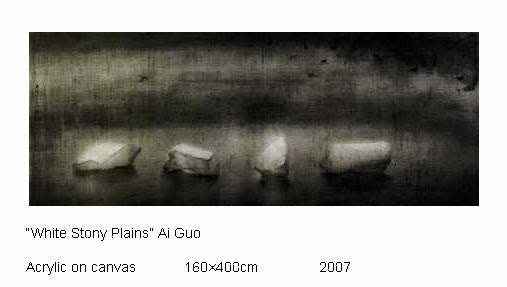 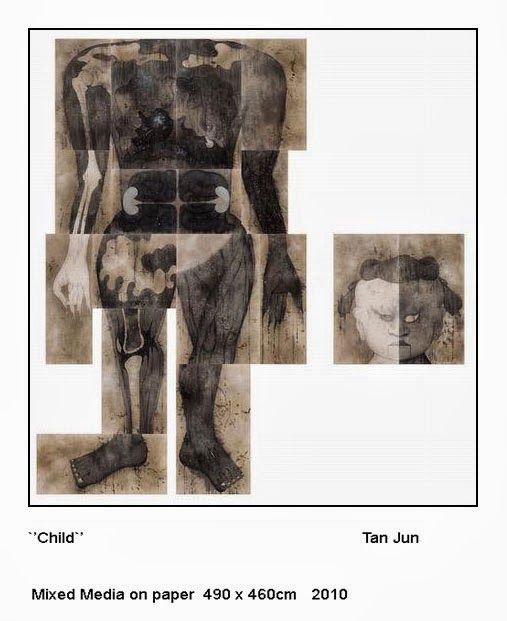 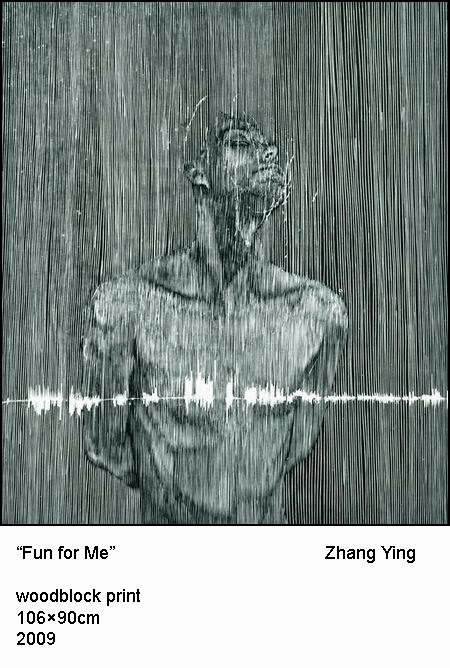 These are a few pieces I came across on the web a while back.  Unfortunately the website where I found them is now in "404" status.  I have just "friended" the person who operated that gallery so perhaps I will hear more news as a consequence. 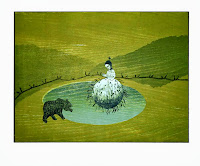 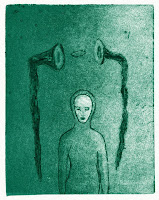 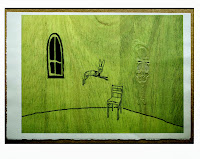 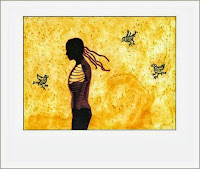 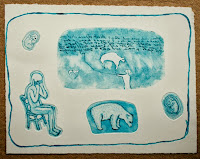 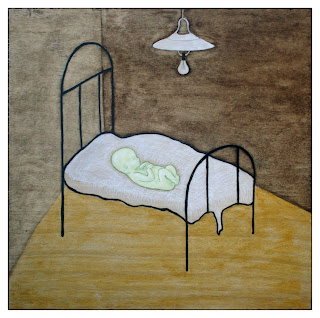 Email ThisBlogThis!Share to TwitterShare to FacebookShare to Pinterest
Labels: transparent washes on wood, Watercolour on wood

I had the little drawing of my original idea somewhere with the bed on the wood background and the infant baby in the middle of it.  I loved how the water colour paint with a lot of water added to it, looked over the wood. 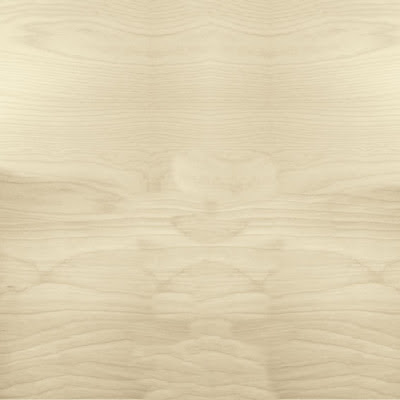 So although I had a piece of birch wood ply which I was going to do the painting on - I couldn't actually scan that into the computer so I thought the best thing to do would be to get hold of some  images of sheet wood from the web and make those into a similar colour of wood and as best as I could of comparable or similar wood grain.  Then I made some of these about 4 in the end, into 60 x 60 cm files at 100 dpi - otherwise my computer wouldn't be able to cope with the size of the file and these were only for working out my ideas further in any event. 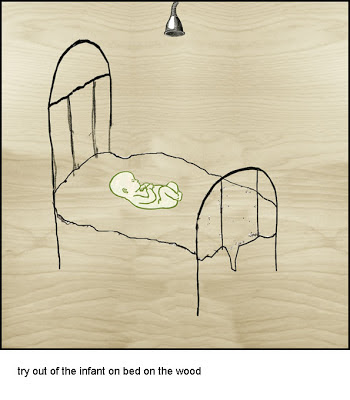 Anyway so I started fiddling about with my curve tools in Photoshop (one of my favourite tools) and so as to get an idea as to how I would 'insinuate' a sense of physical/emotional  space but without being too descriptive or caught up in details. 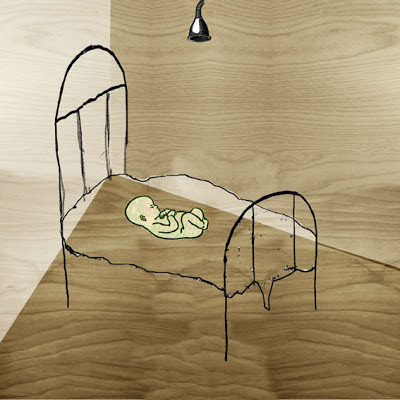 Then I thought of this painting by Van Gogh which had people playing pool in a cafe with these lights hanging from the ceiling - I had always liked those lights so I eventually found it.  I searched around the net and eventually found something similar, did a drawing and adapted the lamps appearance. 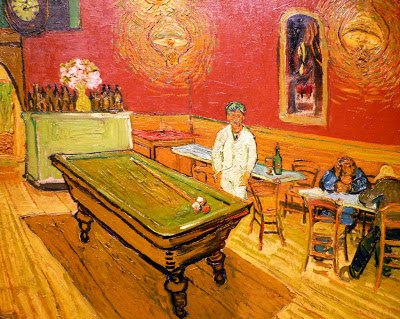 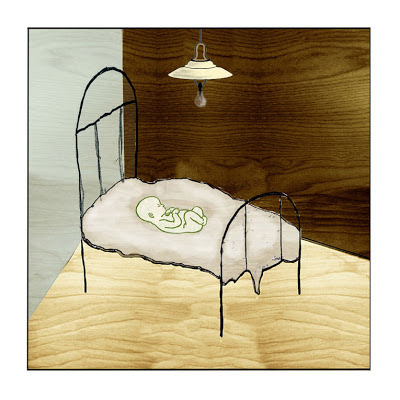 I tried adding a kind of dry-brush effect tool on the 'surface of the bed with translucent white to indicate depth and though  I will go for that on the wood itself.  Tried out whether to have the wall on the right hand side behind the bed, as it were, dark by curving it down  or  would it be better to have that light? 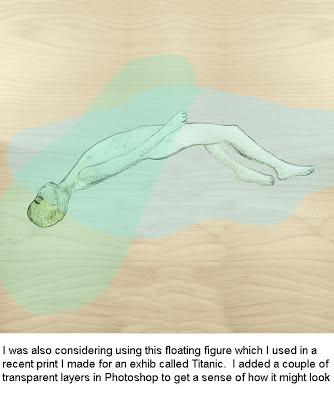 Then I kind of went off on a tangent wondering if in fact the image itself was just too 'stark' .........but then thought better of it.  What the heck ...........I like it.......the preciousness of the individual being, the fragility, the essentially solitary nature of existence.....and so on.    I did like the transparent overlapping of the layers and thought................ hey I might go back to that sometime. 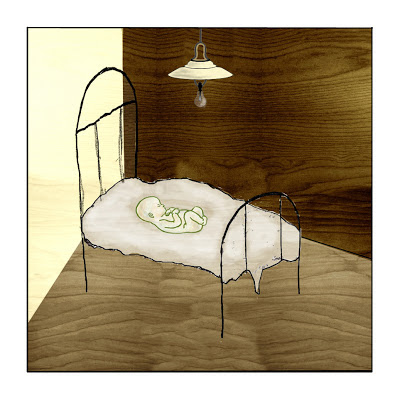 Anyway............,,,,,,,,,,,,,, so I think I settled on the idea of having that back wall dark in the end.
I forgot to mention that I had been thinking about how I might have the infant image with a strong white base to draw on.   That I might use my Stabilo Carbothello water soluble, pastel pencils.  They really are the best and most versatile pencils ....I really love those.
Well I though I suppose I could paint white acrylic gesso onto the wood - I mean I have some somewhere here in my studio.

Then, I cant quite remember where -- but I became aware of a product called "watercolour ground". 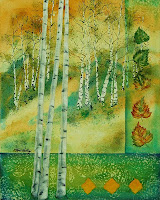 And I though mmmhhh  what's that about ......so I checked it out on the web.   There wasn't a huge amount of information around, I mean that was based on artists experiences of using it....... that is until I came across this post by  Toni Kelly
In her very helpful post,  she shows you how she used it on a hardback sketchbook cover, some metal light switch panels and finally some Lhotka paper.  Seemed pretty good so I ordered some.

It definitely has a unique quality that would enable exploiting the reticulational   characteristics of watercolour washes.  It feels beautifully velvety.....mmmmmhhhh...!!!! 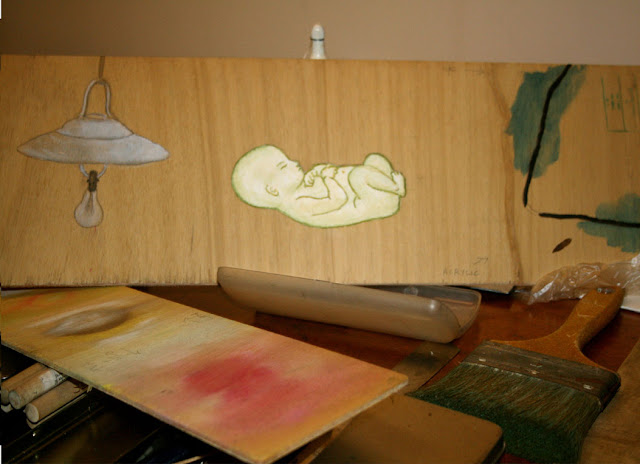 Heres me trying out how I'd paint the infant image and the hanging lamp/  This was the second version same size as it was going to be on the final painting on the wood.

These are some photos  of my tests on wood with various mediums to have as a base under the water colour.  Then there's a shot of some water colours on plain birch wood (thats without a transparent medium underneath).  To this I also added some isopropyl alcohol to see if it would reticulate as per when I used it while doing some monoprints using water based inks.

I was trying out imagery............... although I then stayed with my original idea - that happened fairly quickly which was good.  Then I started thinking about colour and tone somewhat.

Recently I decided to do something I had an idea to do ages ago - but never got round to , you know how it is !!.............. Anyway  I thought I would get on with creating a piece of work using watercolour on to bare wood.  I think the wood I ended up  using was birch plywood.

One of the first things i did (thank goodness for the web) was to see if there were others working in this way.  Well I didn't find much which was a good thing in a way and at the same time not a good thing .

It would mean finding out the pros and cons for myself.  I found some mention of it on Wet Canvas which if you dont know of it has lots of discussion forums on different materials/ techniques  and  a Swedish artist Susanne Gottberg, was mentioned so I looked her up.  Here's one of her pieces:

Very accomplished technically and of course you CAN see that it is painted on wood - she had'nt done a lot of other works of this nature though.

Then I remembered a person on Flickr who used watercolor on to shaped wooden pieces - which I kind of liked although they were a bit too dreamy for my liking Stella Im Hultberg
She lives in NY - very accomplished technically : 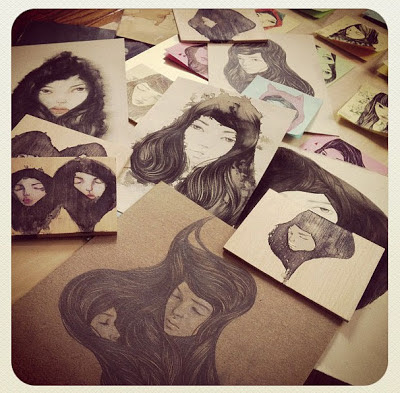 They made me think of art nouveau and the work of people like  Aubrey Beardsley - although of course his work was much darker - well his personal pieces were.   It would seem he also did a lot of decorative portraits and book illustrations too (these no doubt paid the bills).   He was one of my early artist loves.  I have a book on him somewhere.   Here's one of his images - not too risque though ( I mean some of his stuff is outrageous).

Its lovely seeing these again and admiring his amazing range of marks in his use of black ink on white paper.  Such elegance although sometimes its a bit O.T.T...........

I also found someone on Etsy who makes art works on wood which I particularly admired.
I very much liked her technique  although they make me think more of artwork that would be in a childrens book.

What I like about them is the way the artist uses the paint on the wood. Being as I was so taken with her technical application I regret to say that I didnt make a note of her name.    I looked again on Etsy last night............. but could not find her shop which I want to put a link to.

I love the general look of this one and how she has the edge of the bedspread indicated by directional line.  Note the variegated feint wash of the turquoise/green contrasted with the opaque bright white paint - which is a bit 'dry brush' in the pillow and nearby.   I like how the blobs of white  appear as blossom along  the branches , indicated in opaque black.
I shall continue to seek her work out on Etsy and put her name here as soon as I find it.  I hate to not attribute an image - it's so important.

NOTE to artist who made these works:
I am sorry to not have attribution in order and am on the case.

I did see a lot of folk / craft art which people had for sale on the web but often it was very cutesy and twee and to me it didn’t have much merit so ultimately I didn’t find artists like myself,  exploring the possibilities of water color on wood so I got myself a piece of 60 x 60 cm wood and then started working on the imagery although I already had a few contenders.

UPDATE   I have had feedback as to the identity of the artist  on Etsy, whose artwork on wood I admired..............her name is    Kristiana Parn
her website  http://www.etsy.com/shop/krisblues