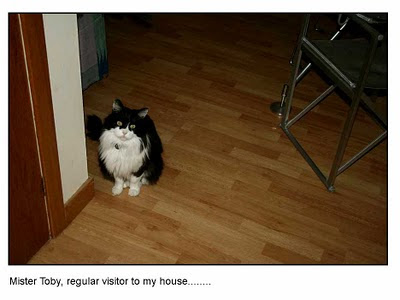 This is Mister Toby, a good friend of mine.  The thing is  that *  I am VERY fond of him.  I guess our affair started about 3 years ago or so.  It wasn’t that long after we had moved into this house.  Toby used to drop by the garage which was then still more a garage than a studio.  I used to take cat biscuits in with me, to give him when he dropped by.  As you can see he is a longhaired cat and he has a sweet temperament.  I love how he looks up at me and slightly cocks his head to one side.  What a charmer!!


He feels lovely to stroke and makes a funny noise as regards meowing.  He lets you know when he is dissatisfied with how you are handling him or whatever.  He sure let me know he wasn’t happy when I was gradually trying to cut out the tangles from his long fur.  Boy was he cross with me and I mean I was only trying to help. Huh !!  No need to growl.
I was beginning to think there might be a colony of weird little creatures living inside the rather large lumps of tangled hair and it  just didn’t seem ‘healthy’ to me. 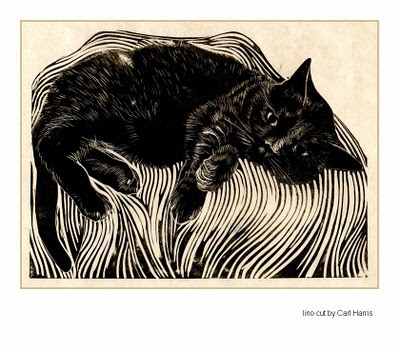 But he likes things to be ‘just so’ and that’s that.  He actually lives across the road with D and H.  Spends about 40% of his time in our house and also visits his Auntie C and Uncle M who live next door to his cat parents i.e., D and H.  He has a ‘sister’ cat who is called Leah.  She seems lovely too but isn’t given to the wandering life, as is Toby.  Seems a much quieter character.
Up until a couple of months ago he was spending about 60% of his time in our house because Auntie C and Uncle M, had their son staying
with them and he had his two large Alsatian dogs staying too.  This was most off-putting for Toby.  I am sure that he is pleased that they
have gone back home now - noisy brutes!!!   Plus they were depriving him of the goodies he usually is given by C and M.
Oh it’s a dog’s life (sorry CATS life!!).  With all the extra food he must be eating on top of his regular diet at his ‘cat parents’ you would
imagine Toby might be quite overweight but not a bit of it.  There’s no spare meat on him at all.  In fact there’s not much to him underneath all that lovely shiny fluffy fur.  Although he is quite a character and I wouldn’t want to get on the wrong side of him if I was another cat. 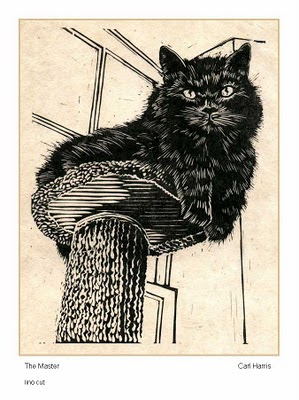 Most times when Toby comes to visit (which is on average about 4 times a day) he sits with me, while I am lying on my sofa taking a wee break after my meals. My own 2 cats are not inclined to indulge me in that way so I suppose that’s one of the reasons that I particularly like his company.  He spends most of his energy in the pursuit of food - I reckon that’s how he burns up most of his calories.

Things not Turning out the way you want ! 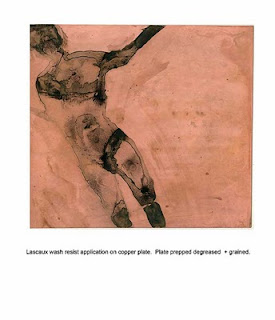 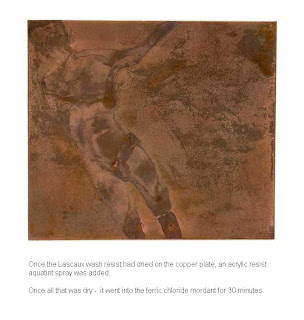 Waiting for a coat of varnish to dry on a piece of Birch plywood so thought I would try to catch up with some printmaking carried out of late.

Many of the plates I was working on in April May were done using Lascaux wash resist.


When you use  Lascaux Wash Resist you also have to use Lascaux aquatint spray - this  is an essential part of this
product’s process.   I have found, that LWR is only successful when used with copper plate.
Zinc and aluminium don't perform usefully with it, at all.
Note we have added some
Indian ink (used for fountain pens) to the aquatint spray to make it more “visible” (especially on silver coloured metals such as zinc and aluminium).

The aquatint spray we have also diluted to the consistency of single cream, otherwise it ‘clogs up’ the airgun spray.
I seem to remember that to e.g., 100 ml of acrylic spray aquatint liquid - we add about 20 ml water max. 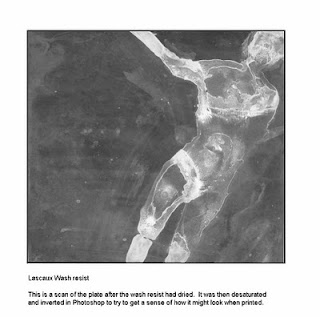 The first time I tried using this product was during the course workshops we did at FDPW, with Carol and Robert.  It was fantastic !!!

I mean the effects you can get so don't be put off by my experience here.

I made a lovely copper plate with them -  and its beautiful.   I made a second smaller one to  accompany it.  These were to be a 'background'  for a print project I was working on for an exhibition in China.  I will post about this project (which will include  these)  later. 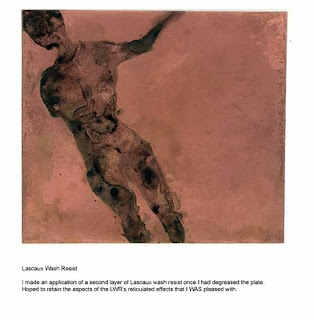 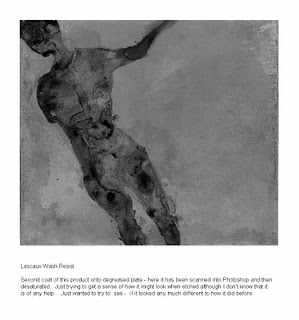 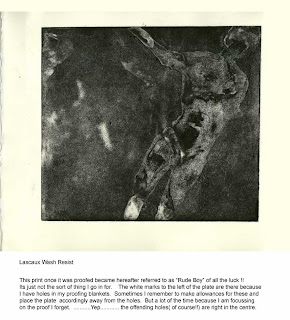 A Book About Death 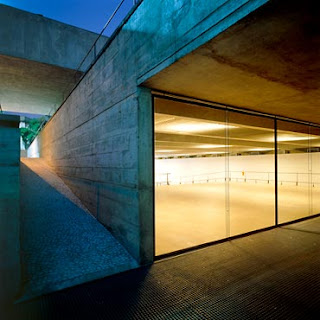 Because I am so behind with updating my blog I am hoping to evince a splurt of activity to rectify this situation.  One of the projects I  participated in of late was "A Book About Death".


A good few months back ( maybe about a year ago in fact)  I noticed somewhere (?) that there was a call for artists to submit to a showing of the exhibition in Brazil.
Because I have two good friends there, Paula Torres a,d Rosana Paulino  both of whom are artists - I always feel a sense of connection to Brasil.  Rosanna has been busy with exhibitions making lots of new work - check her work out - I think it has wonderful significance. 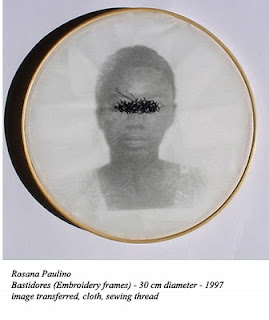 And o I thought yes I will  contribute some work to that project.  Oh, How I wish we could all  do that Star Trek "Beam me up, Scottie" mode of transport - attending private views all over the world / dropping in to see friends far and wide.  It would be fantastic !!!


This was scheduled to take place during February 2010, at the Museu Brasileiro da Escultura.  The museum was opened in 1995 and designed by architect Paulo Mendes da Rocha.  Try as I could I just wasn't able to find a decent photo of this museum which reminded me of London's  Barbican Centre and the South Bank Centre. 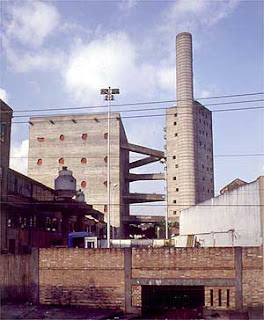 In the effort to locate some photos of this museum I had to look into Mendes da Rocha's portfolio of projects and still no photos of much merit.  Given that my partner is an architect who has worked on some excellent projects mainly in London I was amazed.   I have seen the kinds of photos the practice he previously worked for,  had produced for their projects and these would be pretty impressive so I can't understand it?!.....    Maybe Paulo finished the building and then thought oh my Gawd ....it's a mess and then just quickly moved on to the next thing.


The photo here  (the last one I promise)  perhaps explains why.  This photo reminds me of places like Bilbao and East London.............. say somewhere like Mile End or was it Bow, where I had to go visit one time,  on the London underground, to buy some microcrystalline wax.  It was a pretty grim neighborhood. 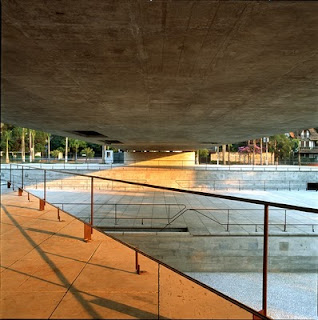 The original exhibition of "A Book About Death"  took place at the Emily Harvey Foundation Gallery, in New York, was instigated by Matthew Rose who has an interesting website himself.


I remember spending far too long having a nosey around it.  He's done lots of collaborative projects and seems quite an interesting artist.


This part of the project i.e., the show in Brazil - that I sent my watercolour works to, seems to have been initiated and overseen by Angela Ferrara., who participated in the original exhibition/project in New York.


I sent a suite of about 33 small watercolours to the Museo Escultera Brasil for this leg of the project.


I HAD BEEN AWARE of the call for works for the project at this point  BUT the idea of getting an edition of 500 together was a tad off putting.   Even ordering 500 postcards,  I mean the cost etcetera -  I must have been feeling a bit "strapped for cash"  at the time.  So that's why I did'nt participate in the original project although it kind of appealed to me.  Ultimately though its not very much a project that has much to do with the book format - it's more to do with the theme "A book about Death" and has been very broadly interpreted.  Although I suppose you could say its to do with an 'open book' in that all the pages are revealed which is in contrast to how the subject of death is usually looked at in Western culture?  Don't know what anyone else thinks?. 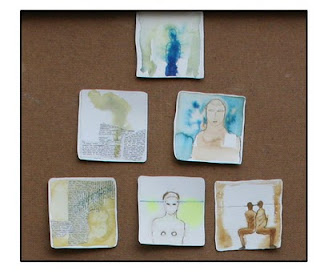 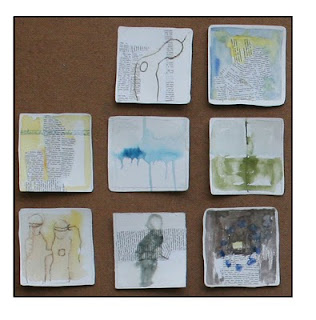 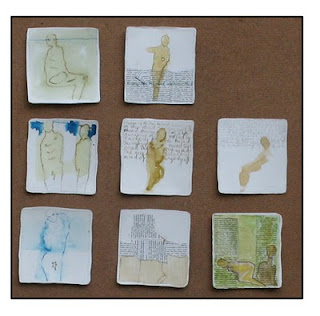 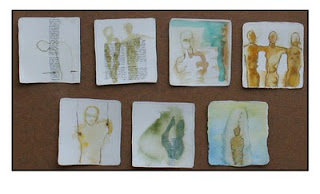 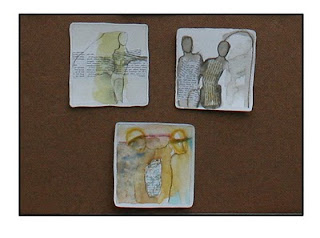 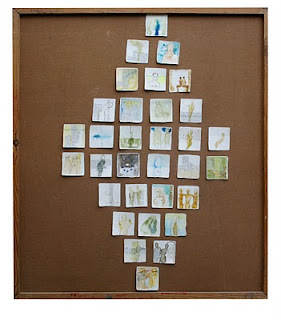 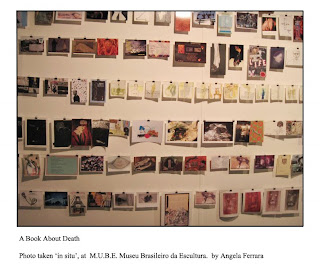 I was pleased to hear earlier this year from Sonia Benskin Mesher, who participated in the New York exhibition.  She told me she  was co ordinating an exhibition of "A Book about Death"  at her local gallery which just happened to be the Museum of Modern Art Wales.  This was to be a 'selected' exhibition so all I could do was HOPE that my work would be selected and I am pleased to say that it was.    The show was on display over April and May.


I made two piece and once I had the image with the horse in it finished I decided that, that would be the one I sent off.  I have to say I really enjoyed making these pieces which in essence are printmaking based collage. 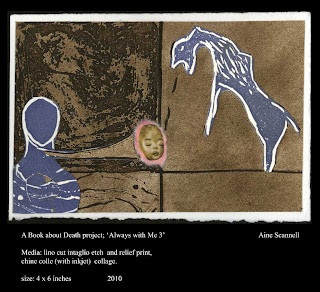 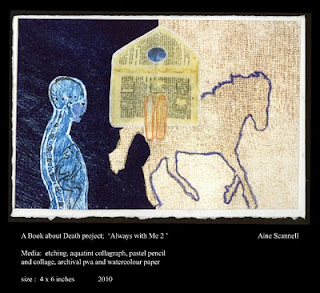