Wood Circle - from Relief to Intaglio 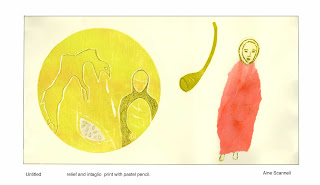 This print / drawing - I am not too sure what you call it, not that it really matters that much - well it was originally produced ages ago when I was at Wimbledon doing post graduate printmaking.  It was done as a relief print.  I just couldn't get to grips  very well with the Albion press there and because there was practically no one,  to offer us technical support much -  I didn't do that much on the relief side.  Having said that I guess I am more into intaglio as a printmaking process.  There was something wrong with that Albion press though - I wonder if its still there in the studio ?  or whether "el Alan" has chucked it out.

Getting the height correct with the various boards so that the pressure exerted when one pulled the lever over didn't seem to work very well. The other printmakers also had difficulty using it.  I used to get stressed up by it.  I don't think I would now as I would approach it with more patience.  I have one more version of this somewhere which is just the single print but also worked with coloring pencils just subtly though.  Blast I can't find it - just had a look upstairs ......... which is now bugging me - wondering where the heck I have put it.

Anyway you get a little bit of an idea of the print proofed as a relief print. 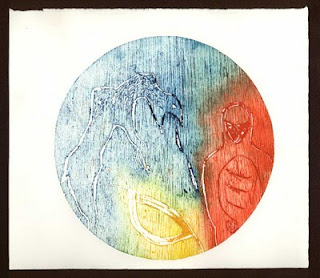 This dreadful mess is a relief print which I tried to print intaglio - although I knew that it most likely wouldn't work because the lines were too wide.  They were originally cut away with a lino cutter - well actually those particular tools can be used on wood or lino.

I had this image for ages and I have always liked it so I suppose I hoped it might work at least to the extent whereby I could make some further interventions .........but no it wasn't really going to be happening.  I was still thinking about which image to work with for the DCA print studio exchange.

In the end I thought that I would try to draw the image again on the reverse of the 'plate'.  So I drew a slightly different version on the reverse. The diameter of the circle by the way is about 18 cm. 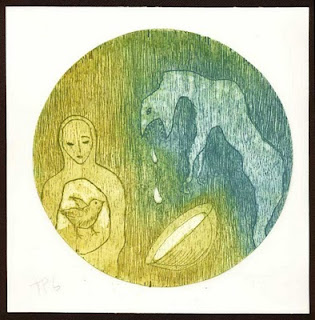 This is a proof of that  image - it's a state proof which I made not long before it was b.a.t.  I loved working with this wood - I used a scalpel to initially go into the drawn lines and then a 'scraper'.  I purchased it a while back at intaglio printmakers - possibly to use for burnishing - though to be honest its something I could do with some instruction in,  as when I have done it - its been a bit of a disaster.
Here's a photo of a scraper - taken from the catalogue of Intaglio Printmakers (London). 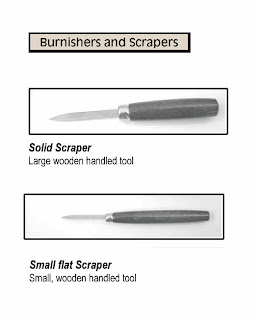 I used it to go into the wood over the lines made using the scalpel and it seems to make a line that the ink goes into well for the intaglio proofing.  I actually have the small and the large one.  The other item which came in very useful was the roulette wheel I bought ( this was inspired by seeing Sandra Baxter using them working on one of her largish copper plates. 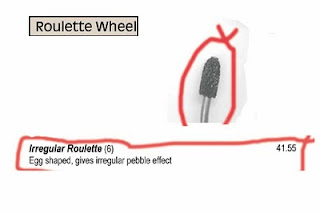