In case you are not aware BIMPE is an international printmaking showcase held  every 2 years in Canada, for small postcard sized artworks created using various printmaking techniques such as etching, woodcut silkscreen etc etc.  The actual exhibition of the selected art works is due to open on the 24th September 2016.  I have been in this exhibition previously although I am not sure whether it was once or twice.
"I am quite pleased with the final sets of prints packaged up to go in the post to Canada tomorrow.   I packaged them up late last night and they weighed 540 grams approx.  This unfortunately was just over the 500 gram mark which made them a lot more expensive.  So after having extensively wrapped and taped them up _ I had to take a scalpel and "un-package" them ....ugh !!!  Never mind I managed to find some foam board pieces and then tightly wrapped them and put some Amazon brown paper ( which they use as space beads when they send you stuff in boxes) .  I managed to get it down to 340 grams in the end - this made the postage costs less .  Not exactly cheap but more manageable"

Here are the pieces I submitted: 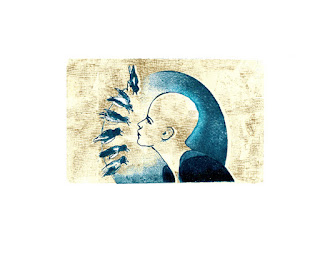 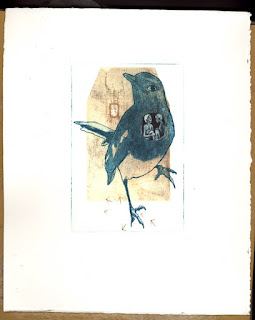 "Inside a Magpie"  I didn't  manage to resolve this piece to my satisfaction in the end,  so I sent a 'replacement' which is the 4th image down in this post.  It's 10 x 15 cm as well.  Like the piece above its an etching/ collagraph  on archival inkjet - with chine colle. 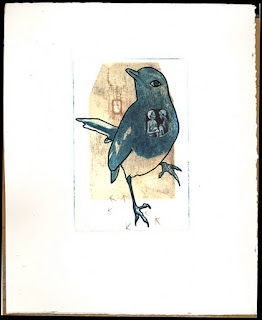 Here is a photo of the same print which I have outlined using the Photoshop to see what it would look like as I may do this using a fine-liner pigment pen rather than just throw it away. I think it looks better although I'm still not sure.................


"Brothætt" (which means fragile in Icelandic)  it's  10 x 15 cm again and made using drypoint on textured polypropylene which I love to work on because you can really 'selectively wipe' the plate to your hearts content and get it just how you want it to look.  The 'grainy-ness' of the surface holds the ink really well. Of course the other thing is that it is easy to cut to make organically shaped printing plates.

Of the three pieces that I made to submit to this exhibition - this was the one I was most pleased with.  You know sometimes when you are making a piece of artwork you kind of know what is the sense of that which you are hoping to communicate - but then coming up with the title - well sometimes saying it in another language is somehow a way of adding something further to the meaning.  I do'nt know whether any of you understand what I am saying but I thought I would say something on the matter - none the less.

"Stitched Bear" (replacement print for 'Inside a Magpie') a test collagraph proof worked into an archival inkjet print 10 x 15 cm.
Love this little creature too and that 'she' has been stitched together as that kind of expresses the nature of the Polar Bears current 'position'.  That is speaking  in global warming terms as in its continued existence/survival is 'fragile'.  I always think these creatures have such a hard hard time of it - especially the females.

I finally got round to trying 'stitching' in a collagraph - something I have been meaning to do for absolutely ages.  You have to do it in such a way,  so that the stitches that are at the 'back of the item' you are sewing do'nt 'show through,  when you proof the print /roll it through the press (under all that pressure).
NOTE I will do a separate post on this sometime soon.