It's been a while................thing is that I have been so busy lately that I didn't know quite where to begin.    Gosh this spellcheck wizard, that they now have here on blogger is excellent.  It's in a little pale blue box, with ABC written in  it,  and a green correct tick mark ( for those of you who haven't noticed it).I have just noticed that it also has a little red button with a big "A' and a small "a" written on it (?) and that performs the dual function of translator as well as dictionary (WOW !!!!) That is good.

Anyway as I was saying and well you can see how easily I am distracted..........Yep I was invited to participate in a print exchange with other printmakers of DCA and as I had just finished (well fairly recently)  the edition of 22 for the 20:20 exchange which is organised out of Hot Bed Press in Salford, I thought ..12 prints - what the heck.  Well I had originally planned to do a print which combined inkjet with drypoint.  Apparently they were hoping to include 20 different print studios and 2 of these were to be international.  I wont know yet whether they were able to realize this until I get my return portfolio and hopefully a sheet of text about the project.  I should receive 20 prints in return.  That's the 20:20 exchange though which I referred to in the previous post.

The print I was going to make was this one. 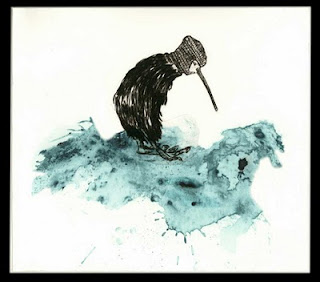 Its working title was "Knightbird and Puddle"
The background i.e.,  the blue-ish area was from washes of ink, which I thereafter scanned into Photoshop and minimally edited.
The bird like figure was done on polypropylene using a drypoint tool..But after this proof was made the Epson 2400 printer- started playing up.

Anyway so I immediately thought....... OK lets see what plates I have,  that are the size required - the brief stipulated paper size 20 x 20 cm so anything that fitted it,  was acceptable.
I did consider using my 'dirt poor' China girl plate I even cut it down to size BUT as I had used it for the "Leftovers" exchange I thought no - it'd be better if it's something fresh that way I enjoy it more.

Here you can see how far I got with "China Girl".
OK first I got Bill to cut the plate for me, at the print workshop. 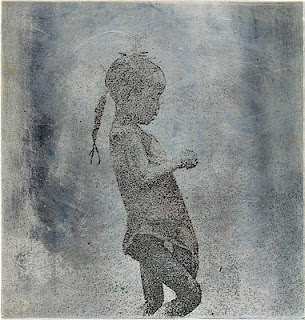 Then I looked around at other plates for potential background prints to locate it, on top of.  Then  I though - like what are you doing!!??  ..... you have to make 12 of these so its better to stick with one plate and use stenciling or chine colle or some such thing as an intervention (as such).
Couldn't find anything the right size in any event .  This china girl plate, by the way,  was about 17 x 17 cm. 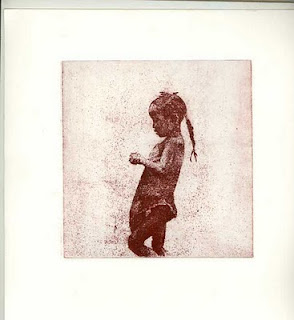 OK first thing was to take a proof of the plate after I cut it down and filed the edge.

I looked though my stack of backgrounds that I have in my digital files and looked through a few potential ones such as this blue one.
Of course by now all the photo emulsion which had been left on the surface for quite a while and which I eventually managed to remove after trying a number of liquids ........was gone   so I could finally take a proof of it, to the bare metal.
Incidentally what removed the photo emulsion from the plate was a product called Johnson's Carefree acrylic floor stripper.  I highly recommend it.  I even think its better than Mystrol and Lascaux remover.   As I am only too well aware removing acrylic stop outs (of whatever nature) can be a major pain in the butt!!
This is an update to this post and just thought i would include a screen grab which shows all the files worked on in relation to 'moving this plate on  into a satisfactory print outcome' Here it is: 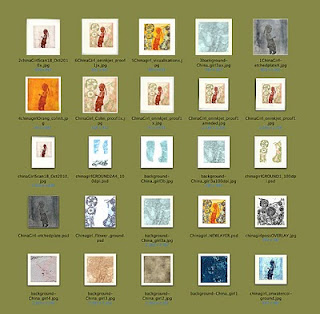 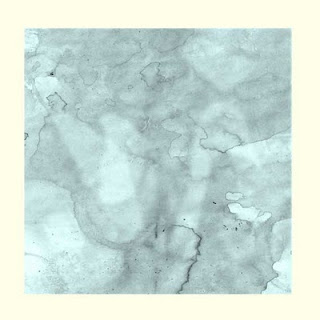 It sure looked a lot better than when I had used it for my "Leftovers" edition ( which was extremely variable)  but it looked alright.
As can be perhaps imagined - I wasn't crazy about all of those dots but thought I would endeavour to integrate this image onto the kind  of  background where it didn't matter.
I considered a whole load of them such as a mottled mould stain in various colours or a washy one or a cracked wall surface - trouble was that  in a way those all looked too depressing.  I though maybe plant forms would be good.  I am aware that I don't often use plant forms in my work so I do collect and make drawings in this direction occasionally so I had a look through those to see what I could come up with. 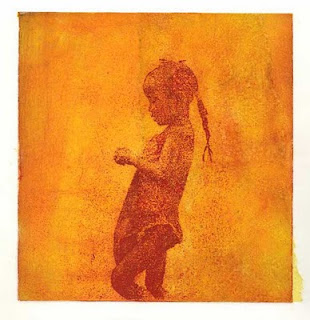 This particular pale blue image is a  scan of a washed water colour page which then also had a stain from a cup of tea on it.   I do like my tea.  Earl Grey tea is my preferred ....although I will tolerate ordinary tea when I am e.g., at the print workshop or if someone is kind enough to make me some at their house and such.   For some reason or other I am always reminded of the PG tips advert from my childhood which had the chimpanzee family in it with their human dresses and trousers with dubbed "speech" when I see ordinary tea bags.  Well the truth is I actually think it tastes awful on the whole.......or it might be that I am addicted to the oil of Bergamot. 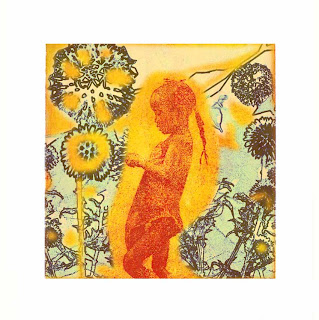 This proof of China girl onto  a piece of yellow chine colle paper - I quite liked the look of,  and had a look in my drawer where I keep such my chine colle papers which cost me a considerable amount of money from Falkiners Fine papers in London.  I did buy them a while ago so they have lasted me well.  This is the place where I also buy my Japanese paper onto which I print inkjet. 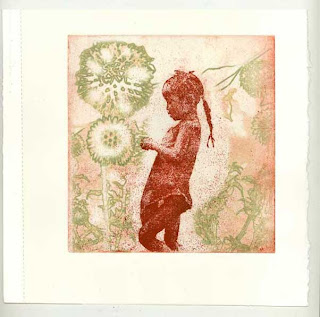 I thought this image I had of echinella flowers ( a name something along those lines- they look like thistles as a matter of fact), might work well so I printed it out and put it to soak.
Those of you who haven't tried printing onto inkjet backgrounds may be interested to know something about the process.

Printed paper from an ordinary everyday dye based printer will run when you put it into the water to soak.
The other thing is that it will fade pretty quickly and as such it is not appropriate for use when printmaking.  Maybe if you were a student and just starting out you might use they dye based .......mind you ..........you would probably find that you had made this great print that was on naff paper on top of dye based ink and someone, like a museum  curator,   would ask you if they could buy it from you...........and then that would be embarrassing plus a lost opportunity.
Anyways at the end of all this - I didn't use either of these prints for the edition.
Posted by Aine Scannell at Tuesday, December 07, 2010 2 comments