Just got an email through from Culture Inside which is just another one of those 'artists communities' websites that I was invited to join ages ago -  maybe 2 or 3 years ago.  As a matter of fact I did enter a competition that they organised for a project called Utopia/ Dystopia about a year ago, and had my work selected for inclusion in the exhibition in Luxembourg. 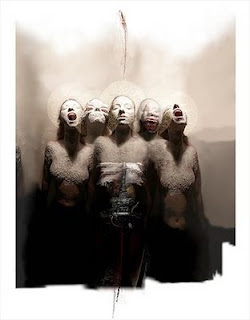 Their current project, with the title "Changes"  was no doubt prompted by the uprisings taking place in the middle east and Africa.  Co incidentally I had decided to watch a Panorama report  on BBC1 television, about Syria.  "Syria: Inside the Secret Revolution - Panorama"

Reporter Jane Corbin with her team  (  scary profession war reporters !!! )  reported on the popular uprising in Syria, where for months people have been fighting back against President Assad's regime. Panorama's cameras went inside the country to tell the full story of those struggling against the dictator and the truth about his brutal crackdown against his own people.

And my god,  the people there are being completely brutalised and murdered by their so called leader Assad, excluding his cronies of course.

How can he stand the sight of his despicable self........  he has to maintain power at any cost.  That is not power that is utter repression and I hope the international criminal court in the Hague get hold of him and his henchman.    How can his wife ' Asma' known as "Emma" to her pals in London (she  was born and grew up in Acton, a bus ride away,  from where I used to live in London,  bear to have anything to do with this monster.  I wonder what she will say to Hafez, Zein and Karim about their daddy.  Here's a quote from her "All three monolithic religions teach us about the dignity of the human being, respect for others, openness and the value of human life".   Like me, she went to a christian school. and is a university of London graduate - mind you she did go into banking as a career so............. 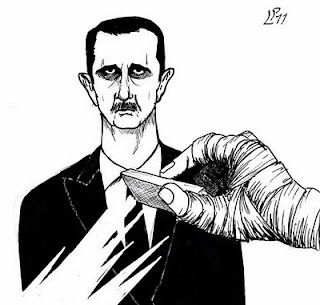 
If only it was this easy

Getting back to the Panorama reporter Jane Corbin, she set up an interview with a soldier who had defected and  he spoke of  colleagues being shot in the back if they were not cooperating by shooting the civilians - that 's why he felt,  he just had to  get out of the country and across the border.   Apparently he had requested that his face be concealed when the interview was broadcast.  He also relayed how the government hired thugs and civilians to pose as armed terrorists in siege situations ( video footage was shown of these 'poser' thugs )  and the soldiers would be told not to shoot at them as they were on the 'same side' as the soldiers - so the command was - "just shoot the civilians".   I am wondering what hole these vermin crawled out of  - perhaps they didn't like the salary being offered for mercenaries by Gadaffi or maybe there wasn't any more work available there.

There was mention made of a high up soldier in the army, Colonel Riad al-Asaad,  who had defected and is based in a bordering country and who is now obviously a wanted man by the Syrian regime.  He is recruiting defecting soldiers and others to form the "Free Syria Army",  in a bid to overthrow the Syrian regime.  He said that gradually an increasing number of soldiers WERE defecting.  However about 90% of the soldiers in the army are of the same tribal origin as Assad so that doesn't bode well unless their consciences  take the higher ground.   I fear its going to be a long and bloody struggle my heart goes out to them.

No Ideal place to Start 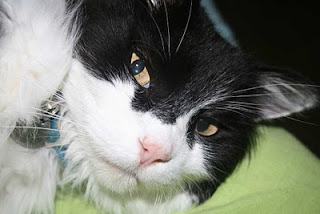 It's been months and months since I have truly been blogging and I do feel the loss of it.  Speaking of loss - last Friday my dearest fluffy 'furbee' friend Mister Toby passed away.

He has gone to Cat Heaven.  He was such a character and I was so SOH fond of him.  It's hard not to be reminded of him as he spent most of his time in this house.  Nearly everywhere I look,  I am reminded of him poor sweetie.  If I look out the front room window - I am reminded of  seeing him crossing the road from his folks house,  to come  back over to us.     If I look at the 'perches' in the kitchen ( a bit like cat feeding stations) I am reminded of him.   It is sad to think I will never see him again.
The photo here was taken in August 2010 just over a year ago where he looks reasonably healthy.  I loved how he'd actually kind of look at you.  Not all cats do that.   Towards the end he was looking terrible and had lost his 'pep'.  It's an awkward situation when you have a cat practically living in your house except he isn't actually your cat.    I had previously mentioned to D and H. our neighbours ( his owners)  that we were concerned and felt that things were not right with him.  I think it was only then that we became aware that he was already 16 years old - we hadn't realised he was that age.

Its such a dilemma where animals are concerned in that,  if they are still eating (which he was) we tend to think they are kind of OK, but he wasn't.  All the while there was a tumour growing  in his liver.

That's what D. our neighbour, said the vet told him.  He had taken Toby to the vets on the  previous Friday and they had kept him in,  over the weekend and then sent him home with a months worth of medication.  But from the time Toby came home, after that weekend of veterinary treatment in their hospital - he was still not himself.     I gave him a final pat on the head as he sat at the foot of the stairs in D.'s (my neighbour) house.   By then Toby was just existing his spirit had moved out of him - away into the ether.   I was surprised that he had survived even that far.  I had thought that he might have passed away over the weekend.  Must have been horrible for D. having taken him back up to the vets on that Friday because he 'd obviously got a lot worse.  It was then  that the vets along with D.  came to the conclusion that it'd be for the  best,  to put him out of his misery and D. left the building empty handed.
That's the obverse of loving - losing - but we had so many sweet treasured times together..................love you dear little Toby - I was blessed to have you as my little companion for these past 4 years.

Outside of this event - the last six months or so I have been working on making an edition of artists books for the BookArtObject project.   The first bound books I ever made.   I am still in the process of sending them out to my fellow participants and so have not  shown them online so as not to spoil the surprise.
I have been documenting the process somewhat taking the odd photo with my digital SLR  and have set up a blog especially for my bookart.  I will gradually build that up with additional info about previous bookart projects.  Previous works have mainly been accordion format apart from one that had papier mache shoes and a scroll. 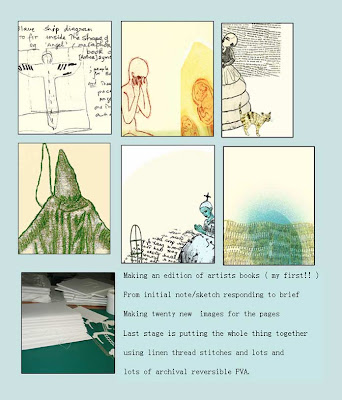 There were so many trials and tribulations that I had to go through in order to make these works.  Although I am aware that my craft skills in book making still have much room for improvement despite immense effort on my part
I was none the less quite pleased with the final 15 books.  So far, I have received  four of the other participants books......................I can not say that much more for now.  Our project is going to be on exhibition at Impact 7, the printmakers conference being held on this occasion in Melbourne Australia - if you happen to be in the neighbourhood pop in and if you go along to see thta exhibition - there are loads of them on their program - take a photo and email it to me.