The exhibition of the international portfolio of prints FURTHER is now being shown at the Fransmasereel Centre in Kasterlee, Belgium. I used to to live in Belgium when I was 19.

The printmakers portfolio is devised and coordinated by Scott Betz, one of the artists featured in the book, this project has led to the creation of an edition of 40 portfolios of prints by a large number of the book's artists. Producing prints in a wide range of mediums the artists have responded to the theme of 'Further' in relation to their work.

The creation of this 'portable exhibition' has led to two exhibitions in winter 2006, at the Salem Fine Arts Centre in Winston-Salem, North Carolina, USA, and at the Galleria Harmonia in Jyväskylä in Finland.

There will be more exhibitions of the 'Further' portfolio, at galleries including the Grafikos Galerija in Kaunas, Lithuania (February 2007), The Frans Masereel Centre in Kasterlee, Belgium (May 2007), the Graficki Kolektiv Gallery in Serbia (summer 2007), and the Galerie Hörnan in Falun, Sweden, as part of the Falun Print Triennial in August 2007.

Other galleries in a number of countries have shown interest, and details will be added on this page as they are confirmed.
Posted by Aine Scannell at Thursday, May 31, 2007 0 comments

Aran
Originally uploaded by ainesse.
This is what I have been working on for the past few months and you can see lots of images related to the work in progress. I like being on Flickr because at least you get some interaction going on from the various groups you can ally yourself to. The first one I joined there of course was printmaking.
Once I get this installation work dispatched to Sweden I will be able to 'catch up' on a lot of internet updating including this blog. I also like that there is a direct link from flickr to my blog which makes it quick and straightforward.
Posted by Aine Scannell at Tuesday, May 29, 2007 0 comments 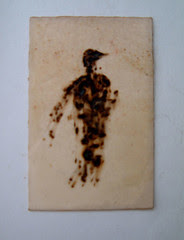 studio06x
Originally uploaded by ainesse.
Its very difficult to find time at the moment well the past few months to do any blogging and so I am posting this little ditty from my Flickr portfolio where I have been uploading stuff. I am gradually producing 'sets' of images. This one is from "Studio/ Activities" I have been experimanting with beeswax and also with a pyrography tool. I loved this outcome and plan to extend and develop more pieces along this line.
Posted by Aine Scannell at Friday, May 18, 2007 0 comments