Please note that this post was originally written at the beginning of August, 2009.

Although I am no way out of the woods yet with recovering from my spinal surgery I am so pleased at how much an improvement I feel. Thank goodness. 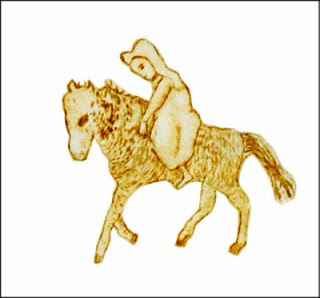 I remember when I lived in London how I used to respond when people asked how I found it when I came up to Scotland on holidays. Well I used to say..."you know what, it feels more like home - some what similar to how I feel when I visit Ireland (my homeland). People I found were warmer, less pretentious and just down to earth.
I know that's a "generalized" perspective and that invariably there are bound to be unpleasant aspects too, but overall this was what I found to be the case.

I am saying this as a preamble to my experiences of late.

Since going into hospital and I have been touched by the amount of well wishes and interest people have shown in my welfare. Sending cards flowers and phoning and emailing even some visitors (thanks to S.C. and S.R. and a huge big thank you to T.C. who has been like a breath of fresh air. Neighbours have also sent their good wishes and well it all really makes you feel cared about.
I also have had good wishes and enquiries as to my recovery from some lovely net friends such as A.W.W. and S.B. oh and then of course there’s R.N. and well it goes on and on. C.s family have also been very thoughtful sending lovely flowers and plants and visiting me too. I am really blessed with these people - when you think of all the nightmare families you hear about on some of those daytime chat shows such as the `Jeremy Kyle show or the Jerry Springer show. They really are the nicest decentest people........

Actually when I woke up early this morning I heard foreign tongues on the radio and then realized it was Radio Scotland and they were speaking Gaelic Scots, which is quite similar to Gaelic Irish when written BUT when you hear it or at least when I hear it on the radio or TV it sounds more like some Scandinavian language. I can make out the odd word such as "agus" (and) but mostly cannot follow it at all. I so admire those people who can speak this language because its a cultural treasure - in the case of the Scottish and the Irish people.

I just had a little trial of getting into the shower/bath with C. and was delighted to find that I was able to swivel myself round to sit down in the bath and to pretend to dunk my head back as if I was submerging my head under the bathwater. So I should be able to have a bath in the morning -- hooray which will be heaven!! Can’t wait. I know I could go have one now this minute but as I have already got myself up and dressed (the worst bit is trying to put my knickers on!!) and then my trousers.

Anyway what I am saying is that having got myself  going....well,  getting undressed now and then getting dressed AGAIN afterwards,  would be too much of a performance !!.

I had thought I might go into the print workshop tomorrow before lunchtime to just stay for an hour at the main worktable chatting to whoever was there BUT now I don't know.

I had better just see how things go in the morning after all - the morning time (after I have been asleep for many hours and lying in the same position for ages) is when my 'physicality’ is at its most challenged “pain wise”.
Posted by Aine Scannell at Friday, September 25, 2009 2 comments 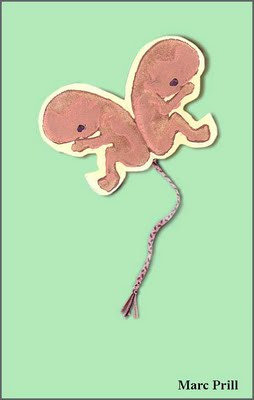 As I mentioned in the 2nd last post I had signed up to send an edition of 100 bookmarks for this project but then my operation (spinal surgery) came up  - I was on the "standby waiting list ".  So I felt it best to withdraw.  I thought I would include the work I did here in any event.

I decided to use the lino cut that I had made for the British Miniprint - I just cut it down to a smaller size.  I considered having it just as it is,  with red string hanging down from where the infants are stitched together.
However I wanted to see what it would look like with a background that it could be printed onto.  I made some pages with watercolor washes on and scanned them.
These I printed out and then  printed the lino cut plate onto,  to see what it looked like. Then I was thinking of trying it on different plain colored papers also.  But ultimately I never completed the project because going into hospital to get my spinal column amended was more important. 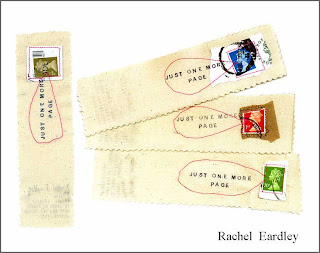 It seems that in the end 37 artists participated in this years event. 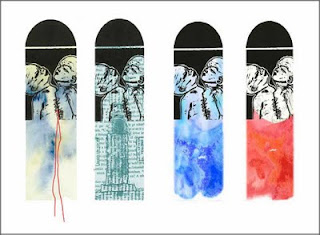 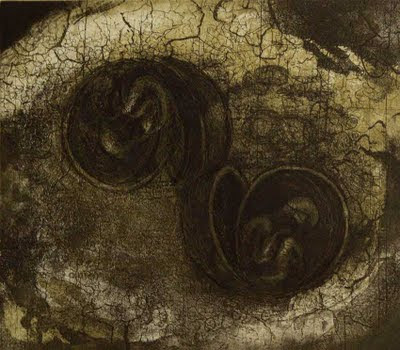 The image is by my chum Ireri Topete a Mexican printmaker who I met through Inkteraction, we were both selected to be in the recent exhibition "No Toxico" held in Mexico (which is where Ireri is based)..

Here's the rundown, on how to get this effect, essentially  using hard ground, gum arabic and talcum powder.


NOTE PRIOR TO UNDERTAKING THIS EFFECT IT WILL PROBABLY BE BEST TO DO AN AQUATINT ON YOUR PLATE.

1. Have plate grounded with an asphaltum based hard ground.

2. Once dry, dust/coat ground with talc.

3. Brush/apply a layer of gum Arabic.

6. Remove plate once desired crackling has been achieved and allow plate to cool.

7. Apply solvent to a rag and GENTLY blot and dab at the plate.

NOTE:  It may take some patience and a delicate touch. The solvent removes the hardgound that is exposed between the cracks

The hardground that is underneath the gum arabic remains intact.
the solvent should be able to get into the cracks and remove the ground


Once you remove the gum arabic, the only exposed parts of the plate should be the crackle lines.

Once that has been achieved rinse plate in water to remove excess gum, and etch the plate 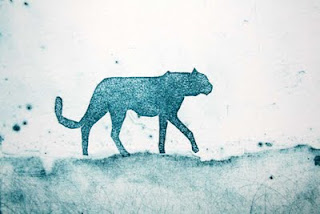 Seeing that image below was driving me mad  so I just had to post a different image on here.
Also,  I am waiting for (above: detail from Print, featured in earlier post)  my SLR digital camera to recharge so I can finish my 'documentation' of stuff I have been doing of late.
Some of it,  is from before I went into hospital for the neuro surgery - as in the
"Bookmark Project"
which I had signed up for, ages ago with Sarah Bodmin of the University of Central England.  It's been taking place over the past five or six years and I thought I'd give it a go.  I started playing around with thoughts and ideas about 3 months before the deadline but didnt buckle down to physically getting on with  it until about 6 weeks before it was due.
Then of course I began to realise that it was going to take far more physical effort that I had anticipated.  I thought seriously about it and because I did not know, the extent,  nor the duration,  of the increased pain and incapacity  -  I thought it best to 'resign' from the project.    I hated doing that  = I think it's the first time I have ever had to do it but it seemed best.  It was for an edition of 100 bookmarks.
Here's a link to the final bookmarks  project on the University  of the West of  England's  website
__________________________________________________

As in the water color monotypes - which were the first thing I did following my adventure with the neurosurgeon.
Posted by Aine Scannell at Monday, September 21, 2009 0 comments 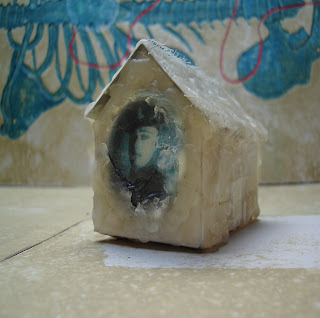 I am going through my blog folder (one of many blog folders!!) and adding much backdated items such as this. It's an image I sent to the 411 Gallery for the second last exhibition that I participated in there. The place is run by a chap called James Ryan and he seems to have achieved a lot with the place. I think that there have been about 4 or 5 exhibitions which were as a result of an open call to artists of Irish origin/association/residence. I have had a poster from them, at one time which was for one of the shows I was participating in and also a rather nice catalogue.
The most recent of their exhibitions I was featured in was "Drawing Eire"which included artists using drawing media in a myriad of ways as well as with a plethora of interpretations as to what drawing is. It opened in March of this year (2009) thereafter the plan was that the show would travel on to Beijing and then Hangzhou.
However I am still awaiting two other catalogues (of exhibitions I was in).   One had the theme of "showcase" although I can't remember what the gallery called the exhibition.   The other was "Cead in China"  ( for which I have the catalogue - and it's a perfectly good catalogue I might add).   I have emailed James quite a number of times and by now have grown tired of his assurances that he will send me one.............
The Drawing Eire" exhibition catalogue - I would have hoped to have received it,  by now. 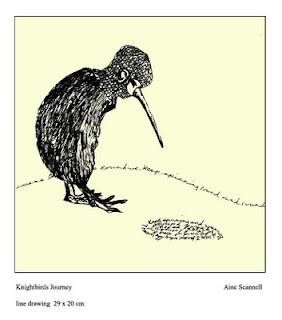 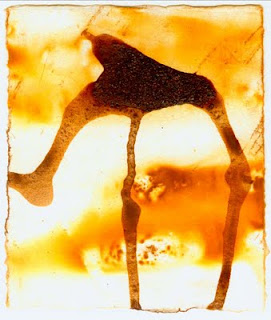 I just found this  picture (above)  of the artwork I sent for the Drawing exhibition on the 411 website  amazing !!!

I rather liked this one (left)  that I saw on there,  which was also in the exhibition. It's by Valerie Gleeson.  She is from Cork city in the south of Ireland, like myself.
Posted by Aine Scannell at Wednesday, September 16, 2009 1 comments

It truly is inspiring - I always imagine that everyone knows about this superb blog but it may be that  you don't.?? !!  ......whatever .......enjoy  http://bibliodyssey.blogspot.com/ 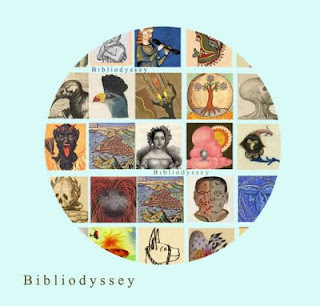 There are  all sorts on there;  mainly though,  it is in the form of illustrations from books of old with the occasional  contemporary entry.   I can't remember how I first came across it but it was a few years back.   Weird animals,  monkeys and sea creatures, maps, divine comedy as well as images pertaining to  apocalyptic visions, are to be found on Bibliodyssey.
Botanical and Zoological illustrations along with illuminated manuscripts also feature.  One is often taken to other interesting blogs by reading what Peacay (the author, who I think lives in Australia) has to say,  on his various posts.    I very much admire this publication because it must take a tremendous effort to maintain it.
I even went so far as to purchase the book that has been published fairly recently , about the website,  a couple of christmases ago,  for my brother