Prints for peace 2 ++ Exhibit in Mexico

Dear Printmaking Artists:
We hope you find this call interesting.
A panel discussion promoting Peace will be organized in combination with the exhibit. See the url reference here for further info
Posted by Aine Scannell at Saturday, May 30, 2009 0 comments

Email ThisBlogThis!Share to TwitterShare to FacebookShare to Pinterest
Labels: "Prints for Peace Mexico 2"

I dont know why I ever decided to have 2 blogs but anyway.....I have updated the back room blog with some stuff I have been doing lately...

Loose Pigments in a printmaking context ??

This is something I have wanted to explore for ages and ages and for some reason .....I finally got round to it.


I think this was the first one. I rolled up some oil based extender onto a perspex (plexiglass) plate and then sprinkled some loose pigment powder, on to it.

I put the powder into a glass jar and then placed a double layer of tarlatan or scrim over the mouth of it (using an elastic band) . I wanted to try to eliminate little clumps and make it come out finely / lightly BUT believe me that's a lot trickier than you would imagine...!! 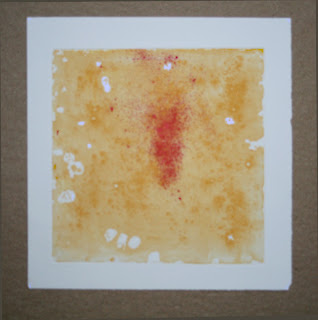 This second image was what I originally had in mind when I was thinking of doing this although my overall aim, is to be able to incorporate intaglio elements with it as well.
I may not be able to 're-soak' them though, once they have been in the 'drying stack.
Perhaps the pigment wont be sufficiently 'adhered' to the paper surface??

I will have to test one to see how it behaves.
I have just included an inkjet chine colle, element with this one. 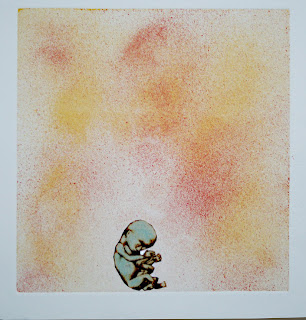 
This next one was an inkjet print of mine from ages ago which I always felt needed 'something else' to be complete. So I hastily tore a template or stencil out of some newsprint and 'masked the areas I wanted to protect. On the plate I previously rolled the pigment, into the transperent oil based extender. 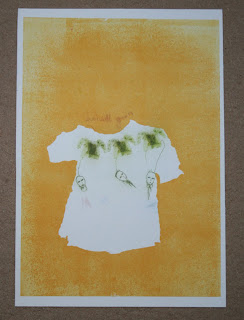 
This one was done on top of another previously made proof using possibly cling film with a transparent blue ink on. Can't quite remember. It's on lightweight paper. 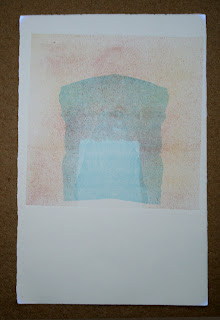 UPDATE  :  these prints have survived from when they were originally created - which was May 2009 Five and a half years ago now .....i.e., none of the pigment has fallen off ....they look the same now (8th February 2015) as they do in these photos. 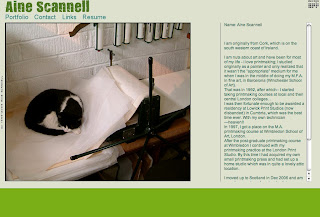 I had an email from OPP today this morning telling me my email account was set up with them (already!!) and when I typed my URL into the browser thinking they wouldn't have that set up yet. I mean they had to purchase a domain name for me .....well I was pleasantly surprised it works!!. I only made my visa card payment to them yesterday afternoon.

Brilliant and so easy to manage......I really would highly recommend it to any fine artist who has been meaning to set up their own website for years and years and never has gotten around to it. That perfectly describes me by the way.
It cost me £110.00, which I think is reasonable, as that includes my domain name an email account and the web storage space as well as the use of the facility for putting the website together and maintaining it.

I might add that I did have a Mac dot com account which cost me about £67 per annum and that gave me access to a set of templates to 'build ' a website on there. You had to load your images to IDisc first though. They also have a forum for Mac users and it's full of all of the things that go wrong and well it's just too wearisome for words. It was limiting.
Additionally they keep changing the 'goalposts' like, for example, to be able to build a website that's a wee bit more customizable you needed to purchase something called ILife - which I did a couple of years ago that was about £70-00, and I did start one and went back to it now and again but....it just was going to take forever. The other thing is that there would always be a latest version of ILife with which you were now able to do this or that.
So in a way I felt that Applemac , were always changing the goalposts. Their latest thing is that the 'Homepage'service is being 'disappeared' after June 2009.

Which meant that you'd no longer be able to update your pages on there after that date so you would HAVE TO go buy the ILife package which has probably gone up in price since I purchased it a few years back.
Finally their annual fee for having webspace with them, is increasing in June to about £100.00 so that did it for me. I thought I'd do a trial run with OPP and well that's the end of the story.
Posted by Aine Scannell at Saturday, May 02, 2009 3 comments