Artwork for Paris May 2018 Estampes +

I spent nearly two weeks making these monoprints.  First I made a series of backgrounds by painting watercolour onto Yupo paper that I placed onto a polypropylene plate.   I also placed some small styrofoam rings onto some of them whilst they were still wet.......... 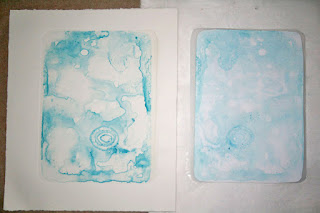 Once they were completely dry - these were then run through the etching press onto dampened blotted paper Fabriano and Hahnemuhle paper.
A practical TIP for those of you making watercolour monotypes - is to use a digital timer to allow them to sit on the press bed, in position with the dampened blotted paper on top and then covered with the blankets - for 3 minutes. This is to give time for 'reactivation' of damp paper on dry paint. 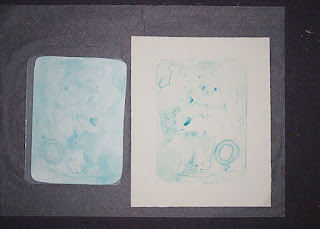 I think I made about eight watercolour backgrounds to potentially develop further into finished monoprints.  BTW - it really is best to use a digital timer because its only too easy to get distracted by a phone call or someone asking you a question and so on and so on.............make sure it beeps and put it in your pocket etc...... 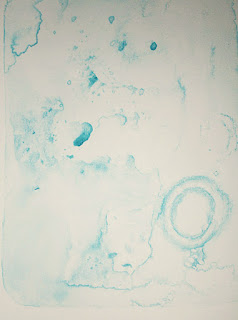 I did the turquoise watercolour backgrounds first and decided that maybe these were just a bit too bright / intense ...........


Well you can see for yourselves.  I did end up using some of them although it was the 2nd batch that I  painted the following day - which I used moreso, for the backgrounds. 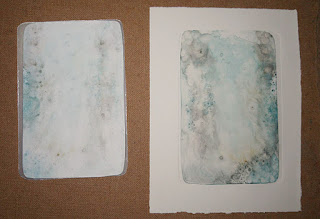 The next batch of watercolour backgrounds were a mix of ochre blue, yellow and burnt umber.  I have to say theres something very pleasing about working on the Yupo paper and you can easily remove it, in areas where you dont like the 'look' of. 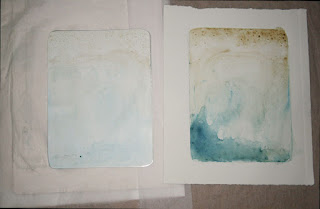 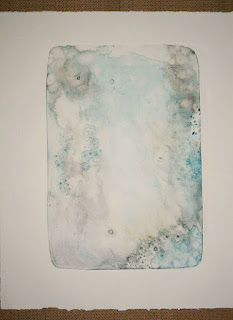 On some pieces, I also used a little washing up liquid "Fairy" brand (UK the most expensive) - that's how I got all of those tiny bubble marks.  Having decided which of these watercolour backgrounds  to use it was then a matter of incorporating various elements into the 'picture space'. 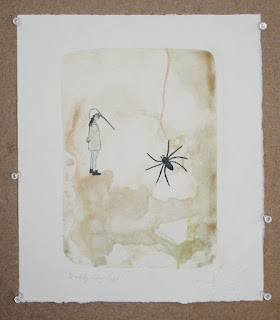 Here an image of a young girl  I had drawn and painted ages ago  combined with an offset impression of a spider and a piece of cotton string that had been 'coloured' with watercolour crayon.

I have to admit this is a pretty tricky strategy as everything has to 'not move' once it has been put in place on the re-soaked  and blotted watercolor background.  It turned out sufficiently OK to 'pass muster' as they say.  I use rice paste on the girl image to adhere to the paper.  It's always best to not use too much paste because otherwise there is always the risk of it 'sliding or skidding' as it runs through the press and making a total mess. 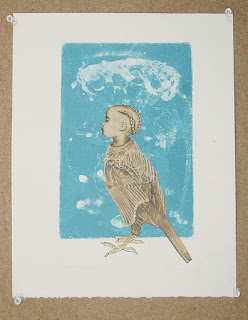 This image which I had been working on lately didnt seem to integrate well with the watercolour backgrounds so instead I chose to use an aquatint plate made using the addition of water and washing up liquid as the aquatint was developed on the copper plate.  I think she looks really haughty. 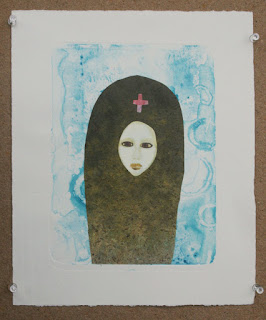 This was one of the watercolour backgrounds that I did use although I'm still not quite sure about this one.

It was good to use some of this roughly textured  chine colle paper that had this nice graduated umbre/olive shaded colour.

It's an image of a female of sorts thats been around in my 'encyclopaedia of ciphers' for quite some time.

Thus far it is untitled. 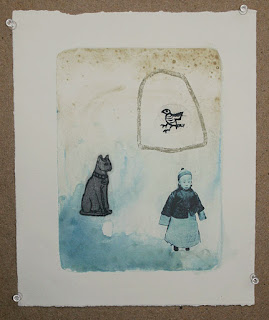 Here (I really liked this back ground) I have incorporated my little emperor (PuYi) who in case you dont know was the last emperor of China.  What a life he lived.   It's an image I am fond of and that I have used previously although I am not sure as to whether it has featured in any of my finished artworks.

I incorporated a drypoint (on textured polypropylene) of a sphinx of an Ancient Egyptian cat.  My brother gave it to me as a bookmark, he had purchased for me in London at the British Museum.
That material really holds the ink well although I didn't bear that sufficiently in mind whilst making this print.

Really I should have done a more thorough wipe-away of the ink on the flat surface - which would have resulted in a paler impression of the plate.


However having said that I find that I have become more accepting of the overall appearance of the finished piece, than I was initially. The little bird (etched copper) was inspired from looking at a book about medieval illuminated manuscripts, another longstanding love of mine.

It doesn't have a title as of yet although maybe I might call it "Dislocation" or words to that effect.  That shape around the bird is a piece of thin cardboard that I varnished with Lascaux acrylic hard ground and when dry I rubbed some water-soluble crayon onto it. 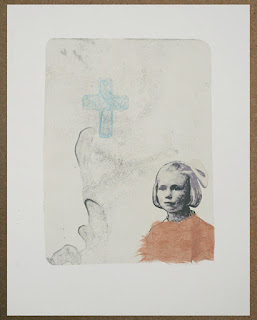 This piece is called Sunday best and it began with this image of a 5 yr old girl (Charlotte May Pierstorff), known by the name "May",who was sent in the postal service in the USA in the early 20th century by her parents.
See full details HERE   They couldn't afford the train fare and were 'sending' her to relatives for a few months to be looked after by them.  Perhaps it then made it possible for them to travel searching for employment.  I am just speculating not knowing of the real story of her family. It was a lot cheaper to 'send her' using that method.  With her being a child of course the USPS  had to deliver her at the address.  I imagine that the parents had not written the 'senders address' onto the 'package'. This was during the very early year of the U.S. postal service.
I loved the story + her photo integrated so well with the picture space I'd created in the watery cream + black coloured  background that I'd made a while back so that became another one of the pieces that I sent to Paris. 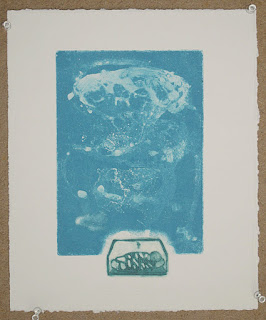 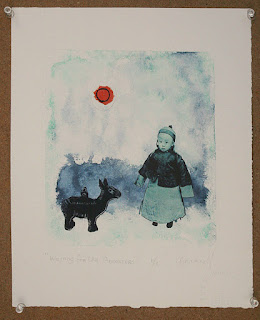 "Waiting for the Ancestors"

The final images - well the one on the left,  is the last of the four required images sent to Estampes+ 2018.  This was also  an earlier previously created watercolour background monotype.
The little animal figure on the left is lino print onto acid free tissue paper, that image was inspired by  looking at ancient Chinese funerary objects - in this case a container for the ancestors ashes.  The little red circle is imprinted with a tiny dry pointed circle on polypropylene - I love how easy it is to cut this material to a desired shape.

Exhibition in Paris May 2018

OK It would have been nice to go along to this exhibition in Paris................but an excursion of this nature would be too exhausting and extremely painful - more than I could bear
In December 2017 - I received an email from artist printmaker called Akane, inviting me to participate in an international exhibition of printmakers, taking place in Paris,  May 2018.  She also mentioned that there would be 5 other artists exhibiting in this show and that its an annual 'event' that they stage at gallery in the city.  I think she said it was called "Estampe+".
YES - I was interested and also keen to know about the other artists ? - I mean I didn't want to show with any who either made sexist, racist or otherwise offencive artwork.  My other concern was I didn't want to exhibit with unprofessional low standard artists.  However having looked up HER portfolio website  I could tell that yep...... it was going to be good all round.

The week before last (i.e., at the beginning of April 2018) - I was thinking “oh great - that's good, jpegs and lists all finished with and emailed off to the exhibition organiser…….

Now I just need to package up the actual artworks in as wide a cardboard tube as I can find, and then post them off to this Paris based group exhibition and that will be that !!  - task done and dusted!”

I can get on with some new work

a) be all the same size

b) be ‘portrait’ orientated

c) that they all should be no more expensive than 200 euros gallery retail price.

Unfortunately I had misunderstood the instructions/specifications she had sent to me, well in advance - which were translated from French, concerning what each artist can show.  The following was included in email instructions I originally received from Akane

“sizes (Jésus vertical) or 2 raisins”.   I  have to admit I found this translation or phraseology hilarious.

It was probably the Jesus reference that threw me………….(what with my traumatic Catholic upbringing and all)

I suppose I was looking through the smaller size pieces that I had and just selecting those that I thought "suitable".
Because everything takes me so much longer to do now because of the spinal pain being exacerbated by standing/walking………I find myself reluctant to do more than I absolutely  have to.

So I selected the following

“Perduras Dream” it’s a copper hard ground etch on Inkjet - boy I tried so many different hybrid copper etch plates to find which one worked out best.
“Catalan Birdsong” Made using polymer ’spit bite’ hard ground etching and digital chine colle. (landscape orientation)
(To my mind) It would fit into an A4 size picture frame.

“Contemplation” (portrait orientation). Made using a hand spray administered aquatint (I used a salad -oil ‘pump action’ spray).
I also added some collagraph materials to the plate to get the outcome I needed, having decided that  It would be easier to do that than go back and forward, and back and forward to the etching mordant and apply resists / and then remove them etc etc etc.

Anyway so that is what I did with that image.  Incidentally - the little face is inkjet chine colle.

“Attic” portrait orientation, mainly etching zinc with a small amount of acrylic resist hard ground applied to the top plate, using a stencil mask.  When it dried,
I just inked the whole thing up.

ASIDE. I think theres a close up photo of this image "Attic",
in Mark Gravers book “Non Toxic Etching”
https://www.bloomsbury.com/uk/non-toxic-printmaking-9781408113257/

I must say that given that there are a couple of my images featured in that book - it doesn’t seem fair that I don't have a copy of that book in my library.
OMG - I have just been on the web to look up the url for the book and it is so damned easy to get distracted on the Internet especially if you get taken onto PINTEREST.  I do try my best to stay off it.   Unless, of course,  I have a very specific focused objective.

By the way if any of you printmakers who happen to read this have that book will you please have a look in the book for me - and drop me a line in the comments box.....I'd really appreciate it.


Anyways so yeah those were the artworks I was going to send until it was pointed out to me that  as well as needing to all be the same size, they needed to be portrait-orientated because of the way the gallery staff  hang the exhibition/wall space etc, in the gallery.

What I also really liked was that they would also be framing all the pieces that us printmakers would be sending.

So the following week I worked my butt off getting these artworks done - mainly because of this stipulation that the artworks all needed to be portrait orientated.  More on this, to follow.