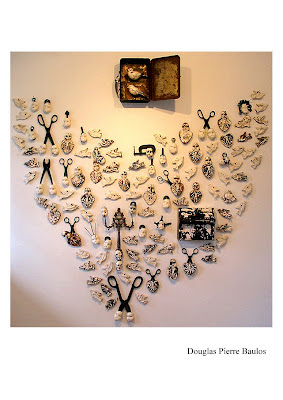 I came across Doug (i.e., Douglas Pierre Baulos) on Flickr a fair while back.

I quite liked his work; some collages were very appealing as well as some of his drawings. There were two of his installations that I particularly liked. Anyway so here is my favorite - there is no title for it nor any details.

From looking through Doug’s c.v. there is some link going on with Cambodia, as he has shown there on and off, over the last 4 years.
He has also exhibited in China.

Other than that it’s all the US of A, which let us not forget is one big vast continent. Douglas teaches, lives and works in Birmingham, Alabama.
His artworks are in some pretty good public and private collections including the Museum of Modern Art, New York.

It’s difficult in a way to pick on any thing that the work is “about” in particular – for me it seems to be about the flux of life. Love, loss, death, memory and possession to name but a few of its aspects.
Posted by Aine Scannell at Tuesday, April 29, 2008 1 comments

The Importance of Communication 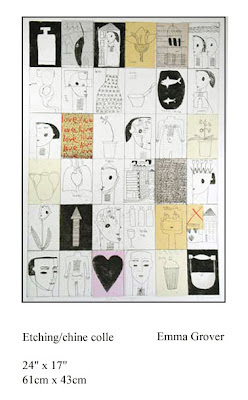 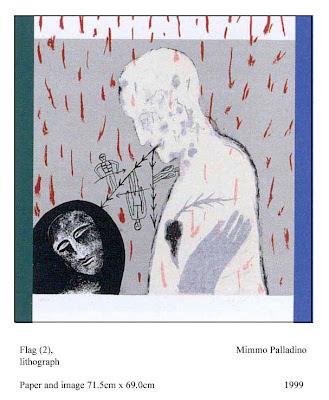 Hooray because my blog is back online. It's purely by chance that I discovered this to be the case. It was taken off line on the 3rd of April for a "spam check" by Google. The email or notice from them, said that it would be checked within four business days. However the actual amount of time was more like nine days or seven business days. BUT I suppose I ought to thank my lucky stars given that some Blogspot users have had to wait a month or so.
Going through this experience has made me realize how important blogging is to me. I mean there are phases where I don't post to my blog but thats usually because I am really caught up in making work for a specific goal/exhibition etc. I really do appreciate that this facility i.e., Blogspot, exists and is available to me.

Thing is that even if there was a charge similar to what Flickr charges for an annual album/account - I would be OK with paying that. That costs about £15 by the way. In actual fact, I would be more secure , if that were the case because then I would know that it could not suddenly be removed from me. I would "own" it.

Part of the reason that I am saying that it's important is because for this past four days my spinal condition has been horribly exacerbated in terms of pain levels. Gawd only knows why ??!! Maybe it's something to do with the fact that I did some printmaking at FDPW on Monday Tuesday and Wednesday of this week. On each of those days, I was only there for about two hours - I was not physically capable of any more than that.
In the course of my various applications eg "hard ground" and applying liquid ground, I used turpentine and white spirit as well as car spray paint. I did wear a respirator mask. Although I felt that some of the fumes did penetrate etc, none the less. I had a bit of a headache and dryish throat on both Monday and Tuesday evenings. My sinuses were also affected and still have not gone back to their usual 'stuffed up' level. In fact my nose is still kind of sore.

I ordered an aquatint screen which has been dispatched today from McClains in Oregon USA. I think using those chemicals and their subsequent effect on me as well as my frustration with not being able to get an aquatint in my etching pushed me towards putting the order in for it. The total cost including the postage is about £55 odd. That's $109 US dollars.
When you consider what it is - it's quite expensive but I did look into it and it's pretty difficult to generate one yourself.

I have also this week been in contact with one of the staff at a company here in the UK, about buying an airbrush. I want to use it to apply the Lascaux acrylic resist etch aquatint liquid. After our short correspondence - I now know which one to buy ( there's a huge choice) and the compatible compressor - I am just waiting for the chap I have been in contact with there, to confirm his opinion re. the compressor. There was some mention of 'low pressure' and as I have never even used one of these I want to make sure that its OK for the airbrush model he recommended. That's going to be an outlay of £265-00 eeeeek.......but if I wait until they get one at the print workshop it could be a long long wait and well I just want to be able to get on with things myself. One advantage of not being able to go out and about is that I don't spend money in that respect so...............

I have always mainly spent any money I have had, on art books and art materials anyway. I once bought a book for £80, in a bookshop in Cork Street, London. I am trying to remember the name of the shop ...no it won't come. The book is a monograph of Mimmo Palladino's graphic works. Of course he has lots of print technicians to help him - how nice that must be!!

The closest I came to that, was when I was on a residency at Lowick Print Studio in Cumbria and I had the lovely Emma Grover to help me.

She does some excellent printmaking herself, I liked her work, the minute I saw it. I remember being at the biennial of the Printmakers council in London in 1999 and we both got an award presented by the then Secretary for Arts and Culture, Chris Smith, for our works in that exhibition. Lowick Print Workshop is sadly closed down now - such a shame -it was a beautiful print workshop. Those eight weeks I spent there were one of the best times I ever had. And thanks to Birna (who I am spending a fortnight with, in Iceland - this coming August) for encouraging me to apply.
Posted by Aine Scannell at Saturday, April 12, 2008 1 comments

Who would have thought a chair could look so ethereal ? 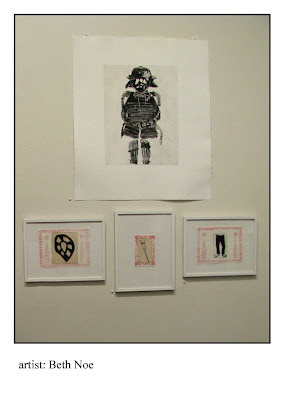 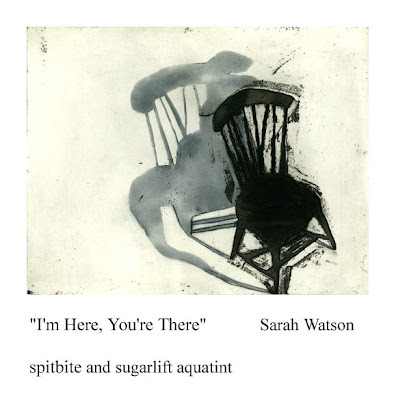 I came across this image of a print of a chair by an artist called Sarah Watson, a few days back. It's a sugar lift with spit bite. The latter is a process that I have never had a go at but would love to. I really wasn't taught anything much at Wimbledon School of art where I did a postgraduate printmaking course. There was an overemphasis on theory and practical print studio practice was severely lacking.

Actually the other day I was thinking that maybe I could do 'spit bite' of a kind, by dropping the saline etch solution on a degreased aluminium plate. I have recently been trying this process out to see how I got on look at my print studio blog (which is tucked away behind this one).
Getting back to Sarah Watson it seems she and a couple of printmaker buddies have just set up and opened a print workshop in Richmond Virginia - called Studio 23. I came across one of these buddies of hers on Flickr called Beth Noe and thought her work looked interesting as well although she also doesn't appear to have much of her printmaking on view on the web. Maybe they will put some of it on their blog once they get a bit more settled in there. I wish them luck!!
Posted by Aine Scannell at Tuesday, April 01, 2008 1 comments