So sad to hear that printmaker, Nancy Spero died a couple of weeks ago 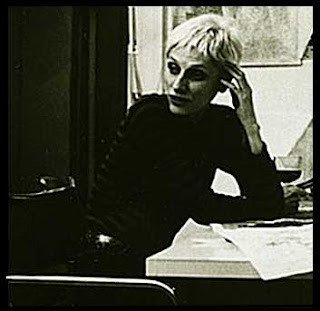 I don't know how she died or if she was ill for a long time and in a lot of pain.  I hope not.  But I suppose only those that were close to her would know such things.  She always looked such a slight figure in photographs that one saw of her.
She certainly looked very beautiful in photos I have seen of her when she was in her 30's or 40's but in any event of course I will remember her for her beautiful and inspiring art work.  I  can't remember exactly when I first became aware of her.  I remember being very "into" her when I was doing my postgraduate printmaking course (1999) at Wimbledon School of Art in London.  I seem to remember that I bought the book I have about her work, around about then.  It's the one that is published by Phaidon.  There have been so may posts about losing her although I don't know that she was appreciated enough while she was still around.  For example the Tate modern I believe either have one piece of work by her or none. 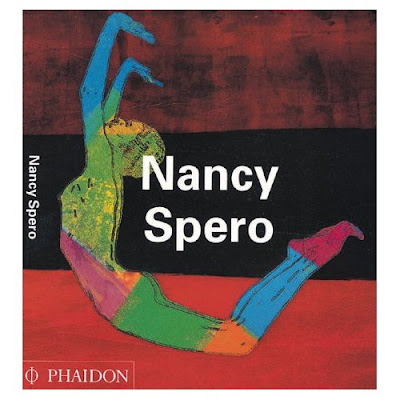 "Her continuous engagement with contemporary political, social, and cultural concerns is renowned.
She has chronicled wars and apocalyptic violence as well as articulating visions of ecstatic rebirth and the celebratory cycles of life. Her complex network of collective and individual voices was a catalyst for the creation of her figurative lexicon representing women from prehistory to the present in such epic-scale paintings and collage on paper as Torture of Women (1976), Notes in Time on Women (1979) and The
First Language (1981)."
from the entry about her on  Wikipedia

For me, as an artist and developing printmaker, I found her inspirational.  I say this in the sense  that her work was formally speaking "beyond the frame".
Although I had become interested in printmaking because of the beauty of the embossed qualities of intaglio and the immaculate white pass par tout, I soon became aware of how much it limited and frustrated me.    It was by looking at artists such as  Nancy Spero and others like Annette Messager, that  I eventually became encouraged to create my own printmaking based installation. 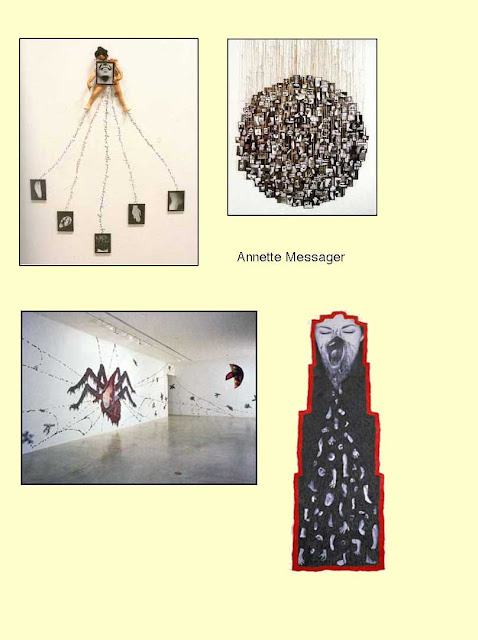 In addition to this, I had also recently visited a wonderful exhibition of printmaking at Whiteleys' in West London.  It was presented by  the Printmakers Council.    There I saw a host of contemporary printmakers who were printing onto all kinds of substrates and onto soft and rigid surfaces.  There were people making printworks  into three dimensional forms, incorporating "ready mades"  and really experimenting with the possibilities.  I felt really excited!!    I think it was then, that I decided to make a printmaking installation to submit to the next such event hosted by the PMC and I did.

It was kind of scary -  I made it about the war in Kosovo and the basis for it was, polarized perspectives and extremism. though it was motivated by my response to what was being reported from the break up of the former Yugoslavia it became a piece about the pointlessness of war. 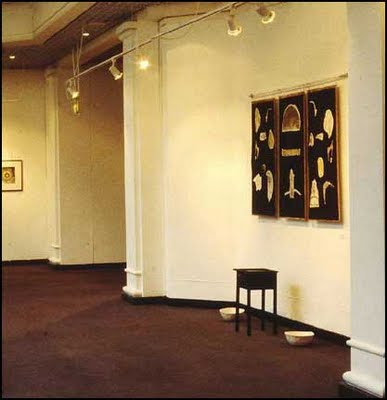 It was called "Silent Apocalypse".   I had recognized in my own work a preoccupation going back a long way and linked to me own origins with the "abuse of power" by all sorts of means .  This being from interpersonal relationships right through to international policies. 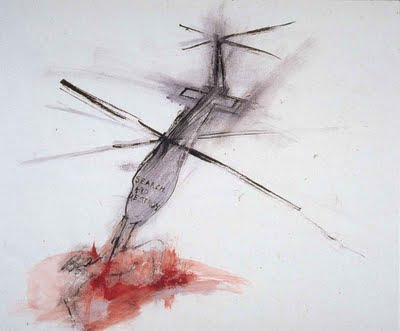 Getting back to the works of Nancy Spero, I was particularly "taken" with the gouache painting /drawing (works on paper)that she did - not so much her early oil paintings.   It was their idiosyncratic nature and the way she,  for example would make a helicopter part human part bird and part monster.  They also had that manic quality that my little brothers drawings had, that he made while he played with his toy soldiers and tanks and guns.
Overall her pieces  appealed to me because they seemed to represent themes that are universal and some of them were quite gutsy.  These  represented the tools of government policies in theaters of war such as eg Vietnam  Only the players were real people getting displaced traumatized raped disappeared and brutalized.  The works were also made from the perspective of a woman and how women are affected by war and violence.
Her husband and long term partner  (painter) Leon Golub,  also worked with similar issues.  She also represented those peoples whose lives were oppressed and smashed by repressive regimes - sadly it's still going on today -  all over the place.

Even though the concerns within her work were often bleak there was a wonderful inventiveness  and beauty to it.

I was fortunate enough to be able to see Spero's work in person when I went up to Newcastle in 2004 to see the exhibition presented by the Baltic centre, in Gateshead.  The show was called "other Worlds and featured 2 of my favorite artists i.e., Nancy and Kiki (Smith).

Taken from the publication that accompanied the exhibition 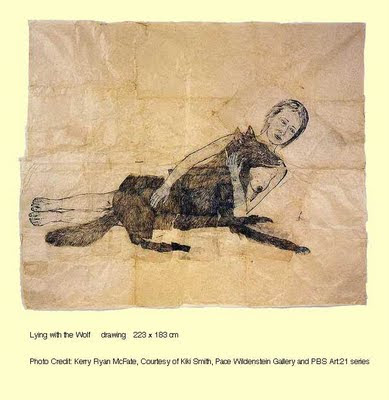 "Nancy Spero is a respected feminist artist whose practice has greatly influenced a younger generation. Her work on paper and her installations are an acknowledgement of the power of the carnivalesque, and an exploration of the potential recoding of space and architecture through a visual poetics of word and image.

Never abandoning the figure, even at a time when images of women were thought to carry only negative connotations, she has systematically refigured the feminine as collective, social and empowered.

Coming from the generation of artists immediately following Spero, Kiki Smith has always acknowledged a liberating impulse in her art.   Both artists have turned vulnerability into strength (*), making art that represents the female body, but in forms that avoid objectification or narcissism ( *: which particularly appealed to me) , and that can speak to the universal without idealization or reduction (*: ditto) . Both artists make art from the histories, fantasies, legends and myths of the feminine, reclaiming the female body as an expressive vehicle of emancipation and desire".