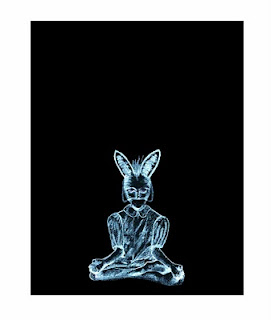 This project was initiated in August 2009,  by artist printmaker, Amy Nack, who was one of the co founders of Wingtip Press in Boise, Idaho,U.S.A..  I can't remember exactly how I came across it - probably cross referencing from someone else's blog or maybe through one of my Google alerts.  I mustn't have had much on,  at the time (unlike the past few months during which I have been frantically busy) so I asked Amy if it was OK for me to be included - as I seem to remember that the closing date for sign up had just passed. 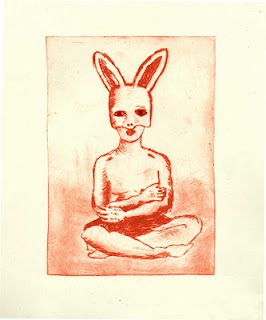 Well I mulled it over,  as to what I would do for this exchange.  Initially I was going to do this aluminium  plate I had an image etched onto,  although I wasn't too sure as to whether I would print it intaglio or relief. Currently I only have a relief jpeg of it - but I shall add the intaglio proof, as and when I come across it. 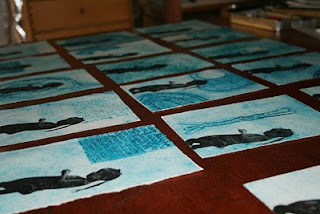 However there was something that wasn't quite right about it and I fiddled about doing little tiny alterations  to  the nose and veil using Lascaux acrylic hard ground  to make the adjustments..........in the end though I think I just developed a deep hatred for it. 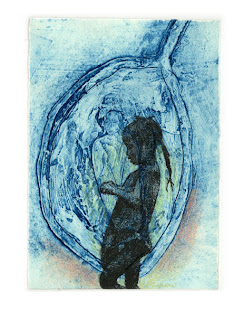 I am OK with it now though as there has been some distance in time.       I also had an earlier dry point (the red one here)  on polypropylene, of an earlier version of the image,  that I was thinking of using but the feet were too tricky to fix up. 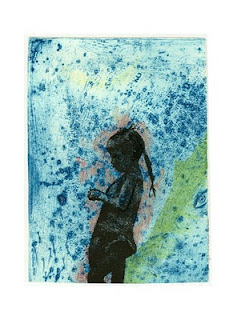 So in the end as I had all of these paper pieces from some 'rejected large collagraph prints from my "Aran" (2007) installation I thought I would use these. 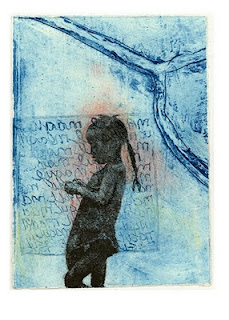 Particularly as that had been the idea with this exchange project in the first place.  I also had this image on an aluminium plate that I had made a while back when I did a course with Paul Musgrove  on Photo etching at FDPW.  I hadn't really put it to much use as of yet.  I thought that perhaps it might work well in combination with the turquoise backgrounds.  However as the plate had proven so difficult to remove the photo polymer emulsion from that proved to be a total bugbear when it came round to proofing it onto the surface of these 'backgrounds'.  EEEk!!! 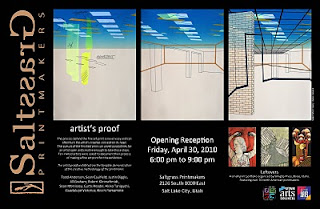 This just was a bad phase in my printmaking practice ...things just get like that sometimes and .......well anyway time was running out   and ~ I just kept with it - I had a date( it was due in by about March/April 2010) by which I had to get the edition posted and I had to stick with it.  Despite all my efforts the edition didn't turn out satisfactorily and it was indeed the most variable edition turned out by my hand ever!!   I added some hand coloring to the prints and turned out a very variable edition of 12. 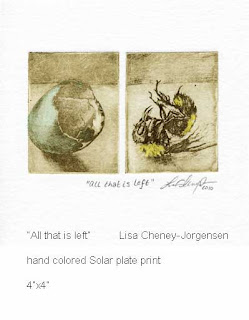 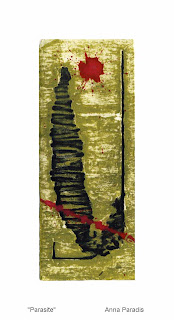 Anna Paradis:   no url located
I have included a few of the prints  I sent.  The exchange was exhibited at 2 venues in the locality.  Unfortunately I can not remember the second place where they were shown.
Getting back to the 'efforts' I dispatched -  I coloured them with 'Carbothello' pencils which if you don't know of them are excellent,  I find for these kinds of situations where you want just a touch of colour.   They are like pastel pencils that are "smudge-able" or if you want,  you can add a wet brush and manipulate them as per watercolour. Cassandra Schiffler:   http://cassandraschiffler.blogspot.com/
In April, 2010,   Amy Nack, the project coordinator and some of her friends, mounted the exhibition of the 70 or so,  participants works in two locations fairly close in succession.  The first being at Saltgrass Printmakers gallery in Salt Lake City, Utah.
Of course I would have loved to see what the work looked like in person but as that wasn't possible - I thought that maybe eventually they would be posted onto the blog.  That way we would all get to see everyone elses work.  I mean thats part of the fun of it for me. 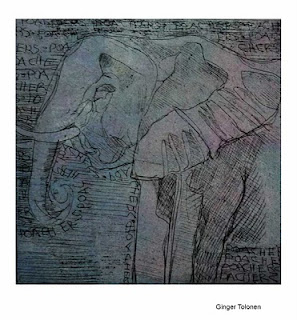 Ginger Tolonen:  http://www.web.mac.com/gingert
I have done this where possible with other projects I have participated in (although I still have some more to upload from other projects).  For example the Emission portfolio I participated in, which was coordinated by Mary Robinson.  That was for presentation initially at the Impact Conference  in Berlin and Poznan (Poland) but was later shown in Venice and possibly somewhere else - I  can't quite recall at the moment. 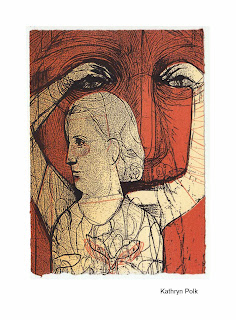 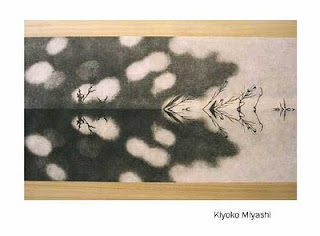 Kiyoko Miyashi :
http://www.art.csulb.edu/printmaking/faculty/kmiyoshi/index.html
In the end though there were not enough images sent through to me -  in fact there were only nine and as I can not set up a folio about a project with over 70 participants with only 9 images to show.  As the fellow participants were good enough to send me jpegs  I thought that I would like to include them here.   Hope you enjoy them. 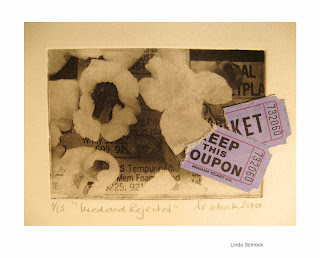 Linda Schrock:  no url available
In some cases people had not scanned their print edition so in this case I requested that another print work be sent as a representation of their printmaking practice. 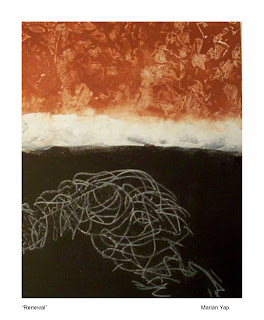 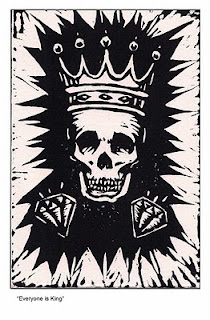 This final piece -is by David Carrillo
Unfortunately I can not find a blog or website for David - if any of you can help on this?
Leftovers Project Blog:   http//leftoversanyone.blogspot.com/
Saltgrass printmakers   http://www.saltgrassprintmakers.org/
Wingtip Press:   http://www.wingtippress.com
Posted by Aine Scannell at Thursday, November 04, 2010