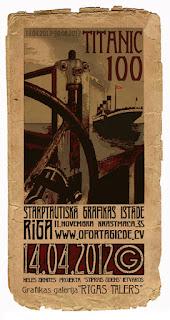 There has been a fair amount of items in the news the last week or so about it being the anniversary of the sinking of the Titanic.  It was on again this lunchtime with coverage of people queueing to go into a shop to buy Titanic 100 memorabilia.  I think that, that's rather 'sad'.  By which I mean spending ones money on that sort of trivia and tack.  Apparently there's a group of people on board a ship heading out to the spot where the Titanic sank.  OK some of them are relatives of those who lost their lives and of course for them it really is something special and meaningful.  But outside of that is it not just a rather voyeuristic  / ghoulish activity. 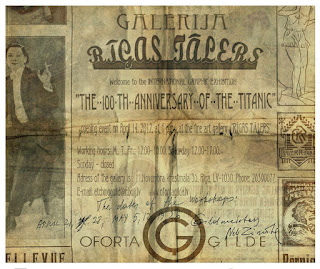 Having said all of that........... maybe I am also 'jumping on the bandwagon' with having participated in the "Titanic 100" exhibition with the Latvian artists association at their art gallery in Riga.
See this LINK to view the artworks I created to submit to this exhibition.  The thing that most appealed to me about participating in this exhibition (if I managed to get selected) was the theme which was described as "Strong Waters" which is in fact a direct translation of the printmaking term 'aquatint' or perhaps more so,  as it is written in the French language i.e., "aqua forte" - water strong. 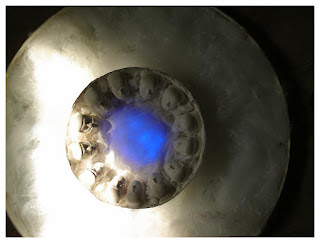 It's a theme I had previously explored in my installation called "Silent Witness" which began as an homage to those who had lost their lives in the 'coffin ships' which is how this phenomenon is/was termed by people in Ireland.  They were the ships that took people from Ireland, ostensibly to America , during and following the Famine in Ireland in the 1830's.

Here is a LINK to photos and the artists statement of that installation which surprisingly is still on the web even though I am no longer officially on the Other Peoples Pixels website.  I previously had a website with them but was unable to maintain the annual payment.

Here is another in case that one expires - this second link is the installation as shown at The Bhavan Centre in London where I exhibited with the Riverside Artists Group.

Its a beautiful art gallery but as you will see from their website they don't really make any effort with documenting all the lovely exhibitions  that go on there which is a shame.

I wasn't so happy with the way I had to show it there - I mean it wasn't a patch on how it looked, when I first exhibited it at the art gallery in  Osterley House.
Being a  huge grand country house (that is part of the National Trust ) its art galleries  are spacious and very atmospheric, so it was  a pleasure to install and view the exhibition there.  BUT where the documentation and promotion of its visual arts program is  concerned I am afraid its scores marks are equal to the Bhavan Centre (as referred to above).
Anyway its just to  give an idea of the nature of the artwork and for those who are interested you get a sense of where it was first shown..

Here is the invitation/ publicity material as sent to me today by artist printmaker, Nele Zirnite, who curated the exhibition.  I think these are rather nicely done. 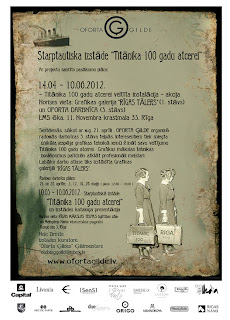