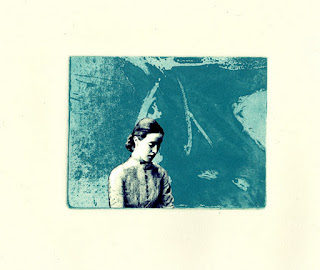 This steel plate etching with inkjet chine colle was one of the three prints I sent as submissions to the British miniprint exhibition, which is organised nowadays by the Printmakers Council based in London, which I used to be a member of ( I was actually on the committee for about 4 or 5 years).

I had been selected for the previous exhibition i.e., the 7th British International Mini print and wondered if it was too much to hope for,  as in will I have success on this occasion?  Anyway I did,  and it softens the blow somewhat of NOT having the artworks I submitted to the Royal Scottish Academy's annual open, selected.  The costs for the RSA were reasonable as these things go,  (especially compared to the R.A.  in London which is eight times, more expensive so you don't feel so bruised. 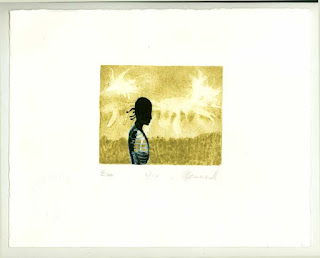 
The figurative image above  is one that I have used previously on a yellow coloured background. The title was "Catalan bird" referring to the small copper etching of the medieval birds found in the margins of an illuminated manuscript. 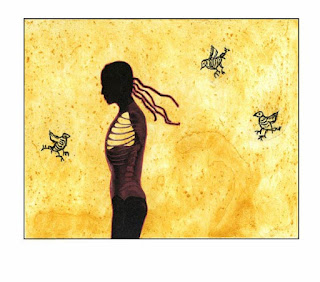 
It was in a work that was made using the so called "Polymer spit bit" technique.  Which is where you laminate a layer of photo polymer film with a stochastic screen onto your plate and then 'cure' it.   After that you layer on another polymer film.   Then you drop some of the developer which is of course made using washing soda crystals and water.  It's ages since I did it - so I would definitely have to search out my notes.

I have also made submissions to the  SSA (Society of Scottish Artists') exchange exhibition at the Wroclaw Fine Art Academy Gallery in Poland.  I have not had any success with my submissions to the SSA as of yet and hope that I will at least this time get selected for this and or for the annual open they receive works (submissions) to,  in the second week of January just after Christmas.

I also sent a proposal for the Engramme solo exhibition (in Canada)  but that is a bit of an 'outside chance' when you are up against people such as e.g.,  Nan Mulder (really admire her mezzotint prints - think these works are better than her paintings) and David Faithful ( his website is pretty nifty - don't you think?!)  who are also  members of SSA. In addition they are long standing members and  quite involved with the organisation so you never quite no what your chances are realistically. 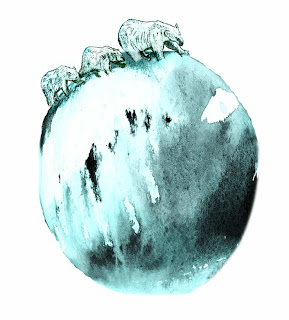 The above image which I refer to as the disappearing polar bears was my favourite I had hoped might be selected but it obviously didn't appeal to the selectors.
I'm sure I 've seen those three bears somewhere before ...........Here's a link to a print started in January 2010 which is still in progress.

The 8th British Miniprint, is currently touring the UK.
Heres another photo of the bears with the embossed edge more apparent. 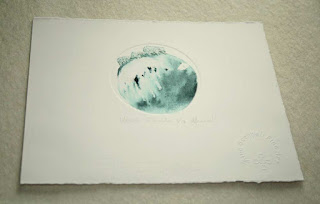 Note this is a LINK to one of the prints I submitted to the previous British Miniprint Exhibition.
Posted by Aine Scannell at Sunday, July 29, 2012