Among other things..........I have been working on larger prints that don't quite meet my standards although they were mostly finished up to a point at one time in their 'lives'.  One of these was a collagraph print.  I have about 5 proofs of it and it seems a shame for them to be just sitting there in the plan chest in a state of incompleteness.  Its a print  that was made during a rurally based, printmaking residency.  It came about after I had encountered a sheep that was stuck on the ground where a gate had fallen on top of it.    I tried to get someone to come and deal with it and they freed it and it was alright  - none the worse for wear, surprisingly.   Here is the print............I think I was never really happy with the 'bear' or generalized creature  (or whatever) that was in those 4 squares, on the left. 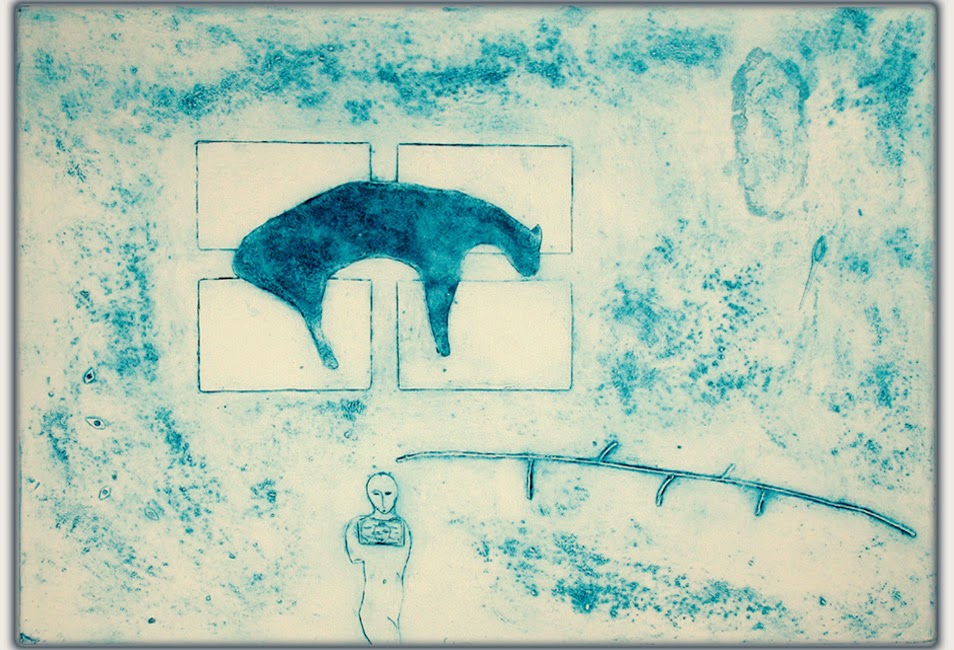 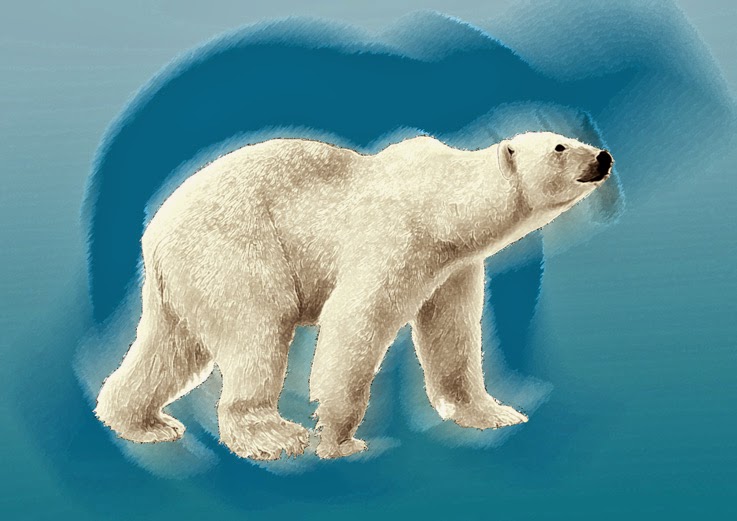 So I worked on it a little and was even prepping it as a positive for a photo etch..........but then thought NO NO NO.
I was thinking no I want to make THIS bear,  this new one as a unique etching, in itself.  And anyway after trying out a mock-up in Photoshop - I did'nt feel it would actually work out satisfactorily. 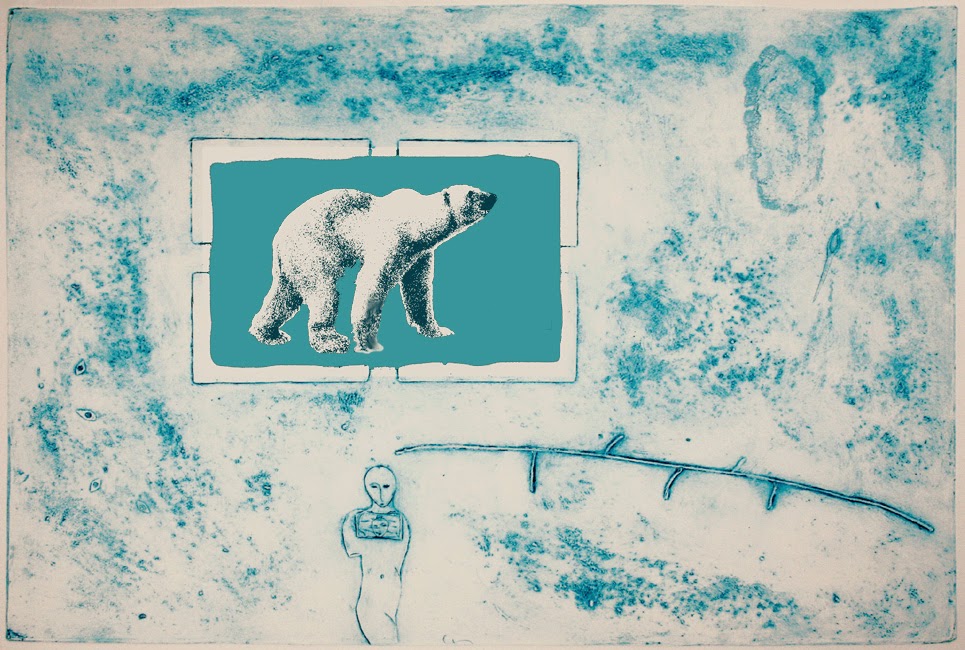 So I went back to the drawing board which involved thinking a little bit beyond the immediate and the obvious........well that's what I was thinking to myself .  What if I placed some kind of transparent / translucent chine colle paper onto the creature and then kind of.........well I wasn't too sure (what?) beyond that.............. but I thought I'd try it out anyway. 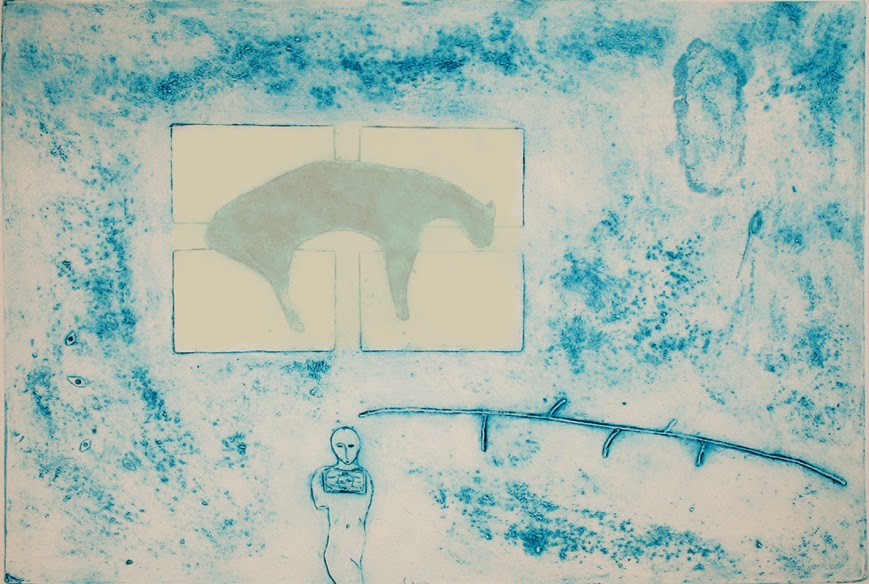 OK......... the photo- mock up does'nt look as good as the actual effect of placing the paper I had, on top of the critter, but I did like how it looked.  So now I am thinking what I will place on top of it.  Also I have several kinds of pale natural colored Japanese papers and I will select the one that works best.

So the next thing I was'nt happy with,  was that patch on the  top right hand side of the print  - that's a difficult one to 'patch up' so to speak.  Well I was thinking of maybe scanning in directly from the print itself.  Like directly below the area that needs working on,  that centre right area of the print.  Then if I can get it to print out in a satisfactorily matching color,  I can chine-colle that onto the print with a plate over it. 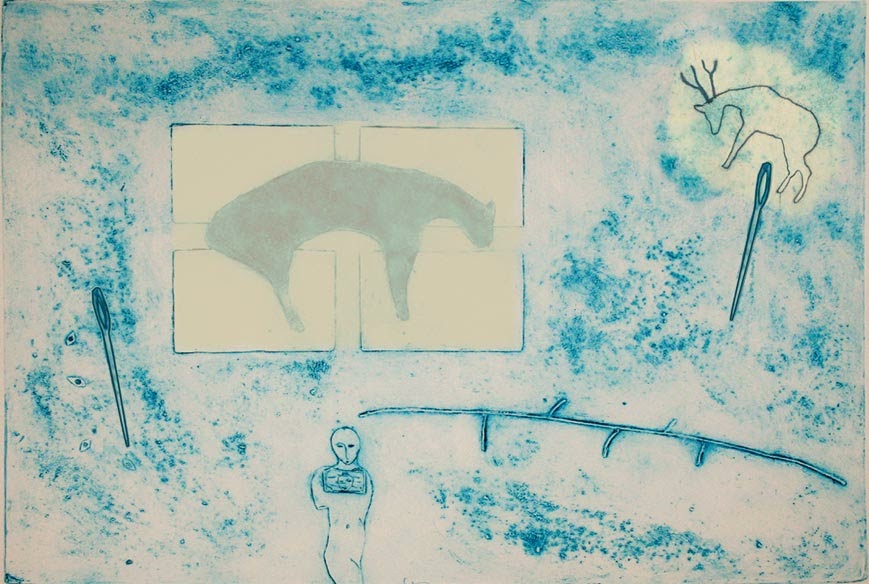 and then the question - what to print over that area?  It needs to be light and fine lined so as not to have too much 'weight' visually.  Well I am still at the stage of working that one out, at the moment.
we shall see ...............we shall see.

Email ThisBlogThis!Share to TwitterShare to FacebookShare to Pinterest
Labels: challenges in printmaking, chine-colle, problem solving in printmaking, reworking a collagraph, scanning from an original print for chine colle