Made this fairly recently- first the gelatin monoprint which I still have not really got to grips with.  I used the recipe as given by Linda Germain and had trouble getting the gelatin plate out of the flat container.  After about 3 attempts I finally got hold of a pink plastic tray from my good friend Tatiana and that worked. 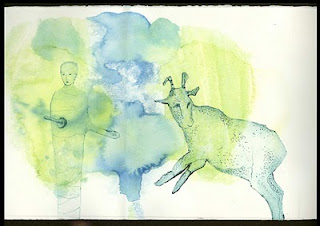 The other problem I had, was with getting the water based speedball inks,  to roll onto the surface of the gelatin -  it just would not cooperate.
I then sent off for a rubber brayer - unfortunately I could only afford a small speedball one.  I have not tried it out yet as I have been otherwise engaged with making a whole heap of 'background plates'.

These are on steel - that's after trying to do some aquatint sprays and etches on aluminium but they just didn't really 'take' and I got a horrible  straight line (with a blurred edge)  of unwanted tone ( a characteristic of the aluminium grain itself - I think)  so I have decided that, that's a wrap, at least where those plates  are concerned.  These were 'large-ish' plates by the way............. well 50 x 50 cm.  I tend to think that alumium is fine for medium to small size  plates but NOT good for large plates especially where the desired  areas of tonal etch are not interlinked.

Getting back to the gelatin monoprints.  Those that I did manage to do which were very much trials, were using water-colour paint and water based 'Caran D'ache' crayons.  I was working on a surface the size of approximately 30 x 45 cm so it was taking me a while to 'splodge up' enough colour from the little water colour pans and that was when I decided to refer back to Linda Germain's blog to look again at the materials she uses.  Speedball water based printing inks - so I ordered those.

The figure on the left was made using old "printers plates" originally used for commercial  lithographic printing.     I have had these plates for years  - I used to have those for when I taught monoprint classes but I  can no longer do these , because of my disability.

So as they are quite thin and lightweight (they are aluminium) I am easily able to cut them up, just using  a pair of scissors.  I had to paint this one with a couple of coats of acrylic hard ground (Lascaux) and then I scribed into it , which gave me the 'ink holding' lines.

It is very feint - this proof -  but I like how this integrates with the watery background.

The goat like figure on the right is made by scribing into 'foil-card'  such as you get with certain items of food packaging .  I can not remember which item of food it was - anyway it worked and what was good was that it didn't need varnishing.  It's a bit fragile though so it  had to be carefully cleaned by pouring veg oil onto a soft cloth and then quickly rubbing away the remaining etching ink. As opposed to drizzling oil onto it and then rubbing that with a cloth.  I have learned from experience that when cleaning collagraph plates which are on cardboard that its best to put a small amount of oil onto a soft cloth and then  quickly wipe away the remaining ink as if I am too generous with the oil it might seep into the lines in the print plate and basically ruin the plate for further use.  I did varnish the back of the plate for  protection easy cleaning and to add to its rigidity.
Posted by Aine Scannell at Wednesday, March 09, 2011