Oh its a Hectic Life !!!!
and of course all self imposed - if only I had been this 'hard working' earlier on in my art life!!!!!!!!
But back then I had 'all the time in the world' or so it seemed!!!  I tend nowadays, what with my various health difficulties, to  try to get as much done as I can while I am able to ( i.e., feeling sufficiently well enough to do so -albeit at a paced momentum ). 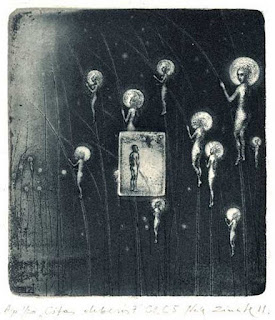 Having said that my back(spine) is not as dreadful as it was before my 'laminectomy'.  This being the term used to describe the surgical procedure carried out  on me, two years ago now.  This was performed by an excellent neurosurgeon (can not call her name to mind)  at a hospital in Edinburgh whose name I also cannot dredge up from my brain.


Anyhu (as "Mister Byrnes" of the Simpsons would say)  I had an email just now from Nele Zirnite. 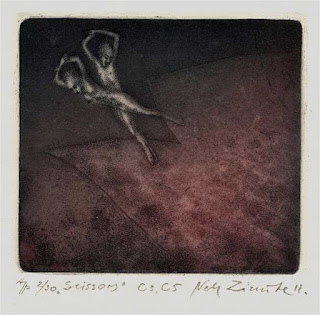 Her work is amazing - it is right up my street - I think we may well like a lot of the same things visually.
Anyway so I am honored to have my work selected,  to be in this exhibition, that she is involved in organizing.  The show is called "Strong Waters".  Although it may have a title which is somehow linked to the Titanic anniversary,  as in its the 100 years aniversary of the year it sank.    Such a coincidence that giant cruiser sinking off the coast of italy in the past few days - very different outcome given that a very high percentage of its 4000 odd passengers survived.  I cant begin to imagine the heartbreak of those,  whose loved ones have perished - it must be unbearable.
Getting back to the works selected for this upcoming exhibition in Riga - I created the piece "Deep" especially for this show as well as another called "Last Words" so I was pleased it had a good outcome.  .  Oh but ............I had so much trouble getting that print to work out !!!.


Mind you "Deep" had it's difficulties as well..........I did four versions of it.  Aye Carumba !!!
The first was in red and yellow.  The next two were done in  two different blues.  The final one which I executed in a more spontaneous and speedy manner was done on black Somerset paper.  I thought to myself "At last I have the ideal situation in which using this paper is completely the perfect thing".  It had been hanging about in my planchest for centuries!!
Here is the "Deep" 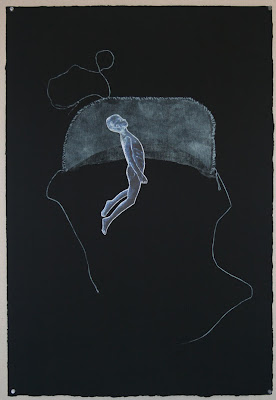 Given  that I was not at all happy with the photos I took of these prints.  Taken under a flouruscent strip light - I couldnt get the daylight conditions weatherwise.


Its even more amazing that they got chosen - hopefully as a response to the imagery itself - well thats what I like to think anyway.   For the net I actually made that form,  by sewing it together with thin cotton wool string.  Then I inked it up and  and off-set it through the etching press.  The figurative image is from a drawing I did which I scanned and fiddled with in Photoshop, printed onto Japanese lightweight paper and then chine-colled it using a tricky procedure of 'half pasting' it as it went through the press.  Thereafter I lifted up,  the upper part of the figure, which then had the imprint of the net on it and had not been rice pasted.  Later on when it was flattened and dry I pasted it down and put it through the press again.  It is really nice this print  'in the flesh' , as it were.    It is about 54 x 74 cm.

Here is the other print "Last Words" 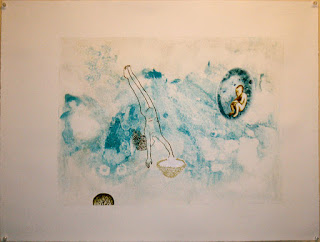 Again a dreadful photo.  This was done using isopropyl alcohol onto water based relief printing ink.  The main figurative element is collagraph with other parts being inkjet chine colle.  The upper right being part of the background having been distorted and polarized to give that 'black hole' effect, oval.

Its pretty cold here in the studio now so I will have to wrap this up now.  I have at last posted on here having fallen out of the habit over this past year.  Lets see how we go - I have lots of other projects I have participated in,  to post about, in order that I catch up with myself.  I am afraid I ended up in the situation I used to always say was the reason that I didn't have a blog i.e. being too busy making art to be spending time writing about it.