I was invited a few months ago to be part of a print exchange by Annie Day (Australia).  Communications had opened up between us following my participation in an international portfolio print exchange she organised to raise funds for the world wildlife foundation. (something like that).  Its funny really because in a way,  I initially only participated as a way of encouraging Natasha, my then printmaking 'protege' (so to speak).  I may possibly write about that project in a separate post, at some point.   Getting back to the theme Magpie.........................an edition of about 10 or 12 (cant find the brief right now)  It's not due in till September though.

Once I started looking into what Magpies are all about I was amazed at how many different variations of this species there are, although some of what I looked at would probably fall into associated species. I mean have you ever heard of a 'cyanapica cooki' ??
Here is one of those by the way:

"Cyanapica Cooki" - are not its colours delightful to us people in
Scotland whose birds and beasties are mainly beige-ish grey !?
I also looked into the fables and mythology associated with Magpies in various cultures around the globe.  I particularly liked a story from China which was about a pair of forbidden lovers who were trying to escape from those who would keep them apart.  When they were at the verge of escaping onto another planet - they were helped by some friendly magpies who linked them selves  together  to enable the lovers to escape to a life unfettered.  The story went something like that. 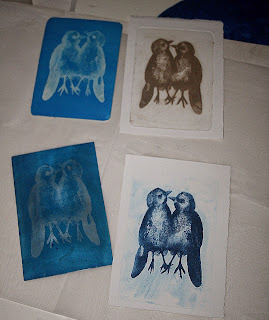 Anyway - it came to the point where I needed to stop researching (of which I did plenty) and get on with it.

Well one of the ideas I was thinking about was doing a pair of siamese twin magpies......but I was finding it hard to work out where to put the 'joining' of the two birds.

So I made a drawing and then scanned it and out put it as a bitmap to get it on to a plate using photo polymer.  I used a small piece of thin alumin(i)um and another plate which was a kind of slightly grained white plastic.

There they are - the plastic plate at the top and a proof using Akua sepia coloured, intaglio pigment ink (water based) and below the plate which was aluminium.  When I proofed these, neither of them had been etched / dry pointed or anything else.  I seem to remember I had to do the photo etch process twice as something went wrong  on the first attempt.

Not surprising given that I had'nt done any photo etch for ages.   I proofed the aluminium plate using the usual DARK BLUE oil based intaglio ink. 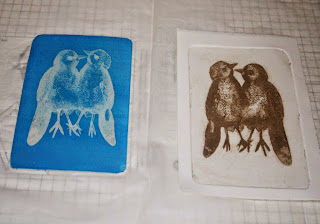 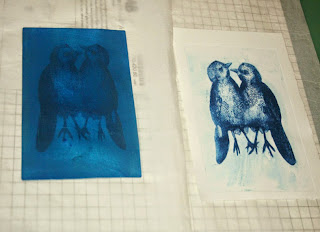 OK so then I fiddled about with these two plates adding pastel ground to them,  dry pointing into them and so forth ....but I just wasn't happy with them .......don't think I made any photos of the subsequent proofs.  Although I had spent ages on the pencil drawing from which I had made the photo positive - it somehow just wasn't 'happening' for me.

I was thinking that I wanted a more painterly image so I 'wire-wooled' (new printmaking phrase)  and sanded a piece of clear polypropylene and then 'painted' a rough approximation of the same pencil drawing using diluted pastel ground and small thin paint brushes.  Allowing each little layer to dry as I went back and forward to it while I was still working (developing more imagery using previous scans of drawings and further photos etc )  on some more imagery on my computer.

This is a selection of a few of the things I came up with: 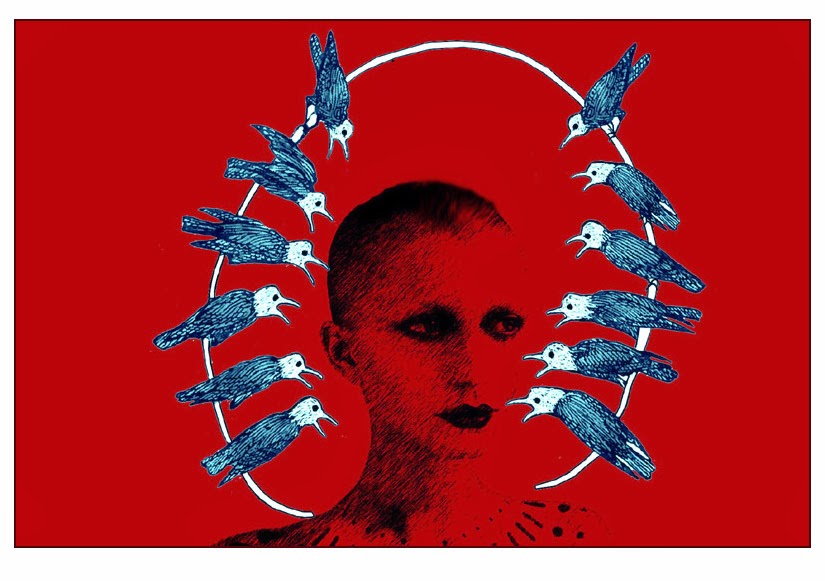 I might have been thinking,  photo etch for the the background with the face and the red.   The bird circle would then have to be pigment inkjet chine-colle and as they (print edition organizers)  are preferring a print with only traditional techniques - that would have ruled this idea out.  I could still make it into a print. 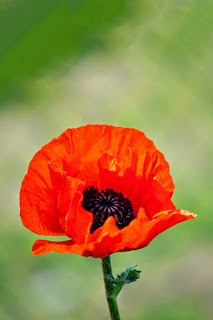 Then it dawned on,  me that I don't often use red in my artwork for some reason - I suppose it's not a favorite color of mine although I do like certain reds. Particularly as seen in particular flowers, eg poppies, sweet williams and pansies. 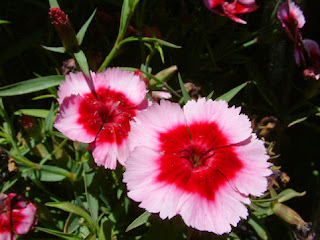 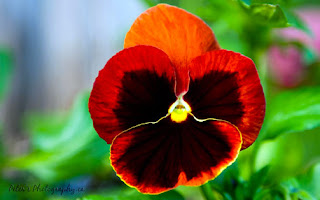 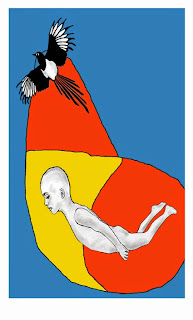 I've referred to this one as the Magpies Kite ( well at least that is what I was naming it in Photoshop.
The figure, I've used here,  is one I made from the time I was researching and developing imagery for the print for an exhibition in Riga.  The print I made for that in the end was called "Deep".  The theme for that exhibition was "Titanic".

Getting back to the Magpie plate I was working on,  just using painted on pastel-ground in layers. 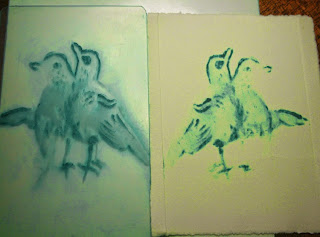 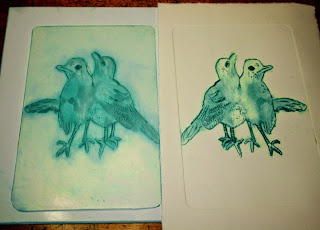 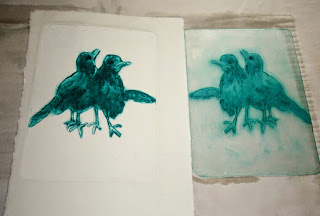 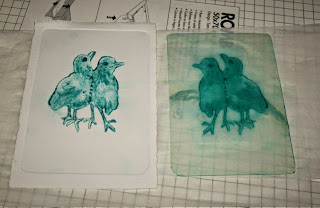 I had to remove their tails because the print area allowance was 'postcard size' i.e., 4 x 6 inches or 10 x 15 cm (I think) and leaving them there would just have made the print too big.

So  I decided instead to add stitches which is reminiscent of my lino-cut print of conjoined infants printed on fabric and also as an edition for an exchange portfolio with Inkteraction (Online printmakers network - now defunct), coordinated by Melanie Yazzie.  Yikes that was about 4 or 5 years ago now.   I did a small version on Washi paper for that edition with red thread stitched into the paper.

I later went on to carve a larger plate and made two prints onto fabric which I printed onto calico and made into pillows which also had red thread in as well as an actual sewing needle that was left with the thread in the needle and 'pinned' into the pillow.

Oh dear I digress once more !!

Somewhere else along the line I made these images which I was seriously considering as possible final images. 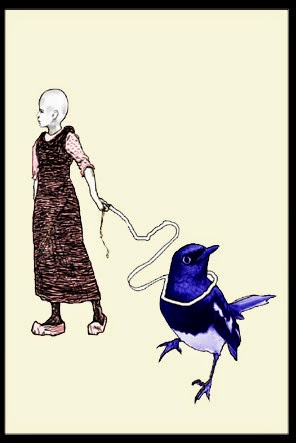 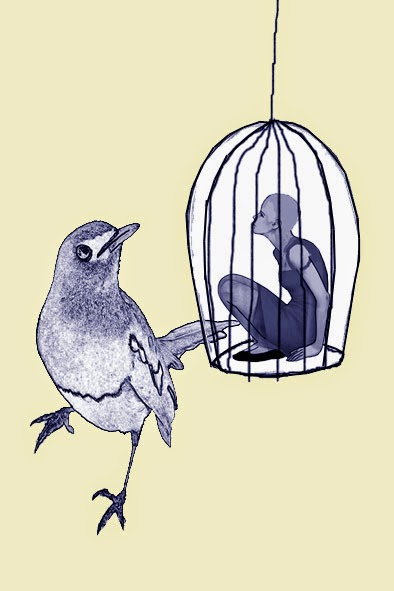 I seem to remember that after I made these - I then got distracted with another project I was working on at the same time using collagraph and dry point.  I was also doing some tests with copper sulphate spit bite on aluminium.  Both activities being related to the same starting point i.e.,  a water colour monotype.  More on this later.
Eventually I opted to make a couple of images in black and white which I then photo etched onto steel plates.


I wont publish these until they have been 'released' so to speak,  by the Magpie project, through Annie Day and Robin Ezra at Printmaking Sisters, in New South Wales.