I signed up for this project with Four Oceans press,  a while back and went through various ideas before I eventually made the final decision as to what I would submit as my ten items.  All that was necessary were that these 10 items were made by fine artists.  Stipulated additionally was that they were three dimensional and sufficiently identical, to be considered an edition.

At the beginning I was thinking that I might use some of these white plastic bottles to make something with but having fiddled about with them before and briefly once more I thought NO ...I will make something using printmaking techniques and create  a 3D object. 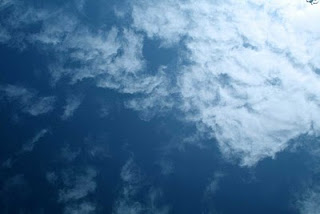 Another idea I had in my head for ages was that of making a house out of sky.......YES  that is, using photographs of the sky.  Then I thought to myself  "oh goodness how am I going to be able to take photographs of sufficiently good quality given my difficulty with standing with a crutch and holding a camera and so on." 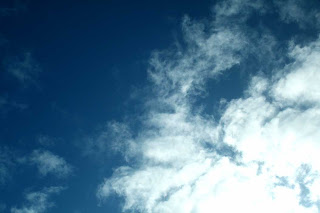 Anyway it was probably while I was blathering about this that the lovely C. must have nipped out the back garden and taken six lovely photographs of the sky and clouds for me.  Having been subject to this act of  kindness the photos took on a more significant resonance and I was driven to then upload the photos onto my computer and fiddle about with them using Photoshop.   I couldn't use them with their "as is" color,  because I'm afraid that the sky in Dunfermline wasn't that blue but the basics were there. 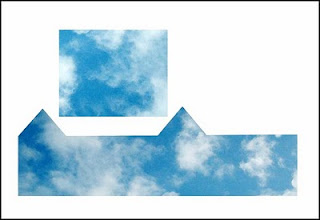 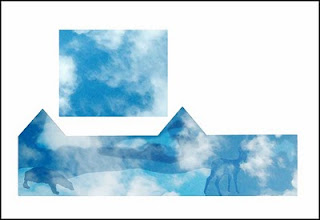 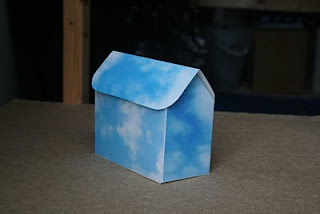 I tried out the water color filter and then the 'accented brushstrokes' as well as the 'find outlines' but I don't now......... I just wasn't that sure.  Then I did some 'curving',  making animals shapes ( which you can see more clearly if you click on image 4 )  and so on.
That effect,  I kind of liked.

Finally I printed it out and constructed the wee house.  So that was one possibility maybe and of course I could print over that using e.g.,  figures made on an etching plate.  Well maybe I wasn't that sure yet.
Posted by Aine Scannell at Sunday, December 27, 2009