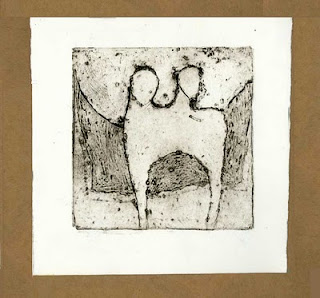 Following on from the earlier post re making miniprints. I had a small collagraph plate from ages ago that happened to fit(almost) the size of 10 x 10 cm so I 'trimmed it down and tried it out on the inkjet print out just to see how it would look. First I took a proof just to get an idea of how it looked.

Not that great, as far as I was concerned.  as the lines around the 'head' area were a bit of a mess.

So I added some carborundum to make the area darker and make the 'head area' more prominent.  I actually can not remember how I did this or what I used but it still did not look satisfactory - either on the proof on white paper or on the inkjet itself.

The original was made using PVA and plaster powder I seem to remember and the plate became ever so thick and clumpy.  I certainly wouldn't make it that way now but I think it was an early plate. 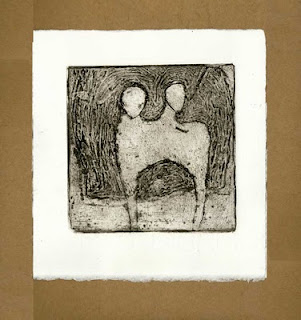 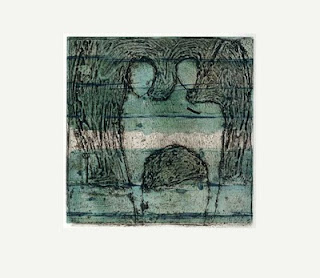 So that was that.
Posted by Aine Scannell at Sunday, December 27, 2009