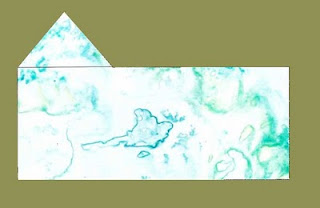 As I had already made these circular monoprint backgrounds I wondered about using them as a basis for the house forms?.   I retrieved some high resolution jpegs and gave them a 'try out' on the computer screen using Photoshop.  But ~ I thought nah..... doesn't really do anything much for me.  I think I then  left it for a few days   A couple of nights later as I was  lying in bed, going off to sleep, I had this idea of making an embossed house with shapes of animals and creatures and maybe objects associated with aspects of just `'being" in your own space; in a place where only you could go.

I was thinking along the lines of a 'house of the soul' or 'of dreams'.    That  idea appealed to me,  in that,  the figurative elements, so to speak,  would only be suggested given the nature of embossed images.    I had always liked the idea of making some artwork using this process and it struck me that given that it would be a 3d form then it would be easier to see the emboss.  I thought that I might incorporate a botanical form alluding to the idea of growth and gardens   I also liked the idea of the animal like spirits.

As with all of my house forms there would be  no door in or out of this space as the idea is that it represents a place of rest or meditation and of privacy. 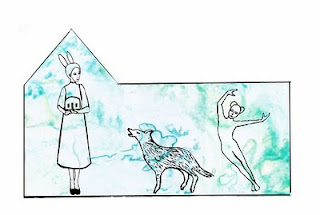 But no it was going to be the emboss house forms I thought to myself.  So using Hahnemuhle or what is sometimes called German etching paper I did some tests with various  animal shapes cut from polypropylene. The first emboss house here is  test trying out  various shapes - thought to myself better not include a cross as it might not appeal to a non Christian.  The rabbit didn't look so good either. 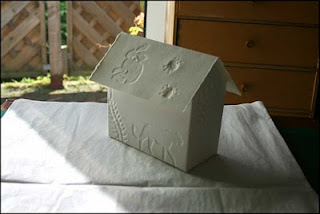 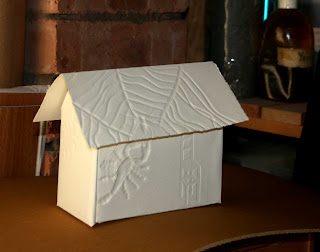 I also tried some shapes cut from other materials e.g.,  linoleum and card but I preferred the polypropylene.  These last two images of single house forms show the final house form  showing each side.  It reminded me of ice cream and of Aran jumpers!!  The final shot shows all of the houses together which of course I send flat packed to the Four Oceans address in USA. I have not yet received my ten items by return but they should turn up sometime within the next couple of months and I will then load them up to my main website in their own portfolio with a link here from the blog. 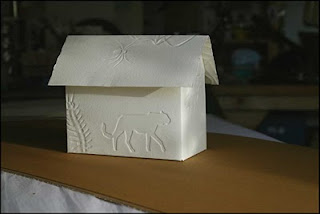 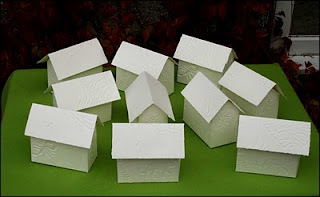