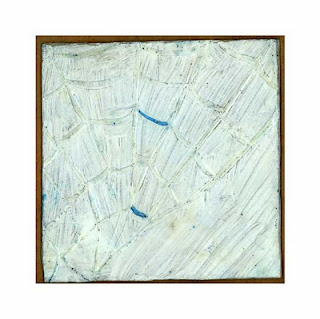 From an old collagraph cut away millboard.... to two copper plates.   One monoprinted using KitKat foil scrunched up and the second with a polymer image on,  made from a positive using  tusche wash on true grain (textured acetate).  This having been  exposed  on an ultra violet light box /photo etch. 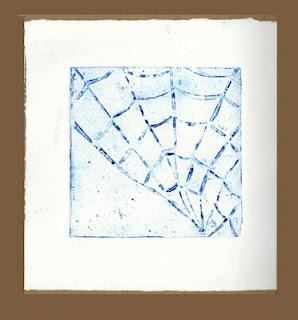 I wasn't too happy with the blue on white so then tried it in warm indian yellow.  Additionally there were 'gaps' in the web image so I had to fix those up.  With this yellow proof I additionally surface rolled it. 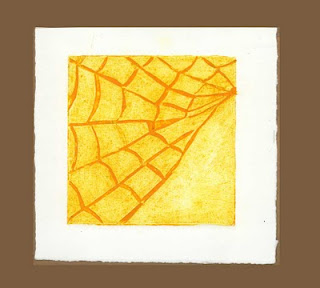 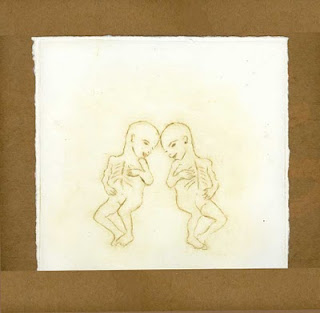 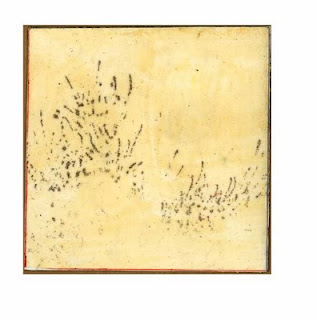 I had this little plate from a while back which I also considered.  It was made by scribing into a green Toray plate so it's either an engraving or maybe a kind of drypoint although I tend to think it's the former as there was no burr.

The image with the plate which has had adhesive blown around it using drink straws and then had carborundum sprinkled upon it was also made and considered but I didn't even get as far as proofing it because by then I was thinking that I would have to really use photo etch to be getting anywhere satisfactory.  The accompanying difficulty with getting anywhere as far as this miniprint was concerned was to do with the imagery I was using.
I needed it to be something that mattered tome .  To be something that had some significance.  I suppose because I had done that proof of the web on the mill board. 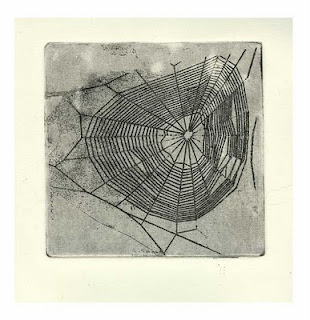 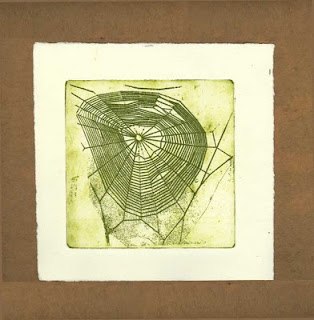 I remembered that last year or before that even when I was doing some tests I had made a small photo etch on copper, of a spiders web that I liked so I had a look around and finally located it.   Took a black and white  proof.  Then decided to do one in green.  It was the correct size i.e., 10 x 10 cm and I was thinking I could block the lines other that the web itself using acrylic etch and possible cover that area  with carborundum. 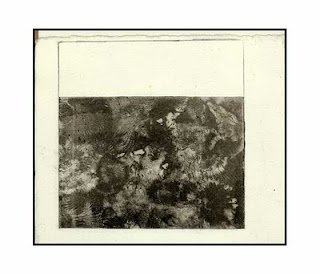 But then while I was looking around for that little plate I came upon an even smaller one which was I think about 10 cm by about 7 cm.  My chum Tatiana was here at the time while I was at this stage and I was saying to her how I would really have liked to use this polymer positive but it wasn't large enough. 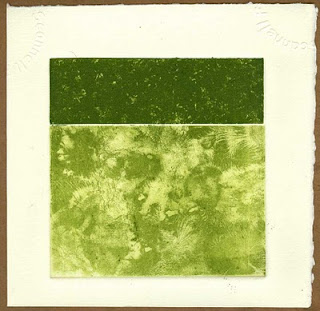 Tia suggested  making another wee  plate for the remaining 3 cm by 10 cm.      I always say two minds are better than one so that was it I knew I was off then.

I had another plate cut by Bill our wonderful technician using the exact same plate which was a piece of Negjet zinc which I have had for years.  Its gorgeous to work on that and copper are my two favorite surfaces for any kind of etching or polymer photo work.