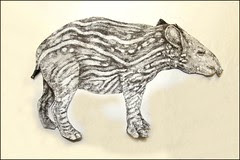 TAPIR artist trial proof by: Sandra Baxter
Originally uploaded by ainesse.
I told myself that I would not load this on here UNTIL I had finished doing my Christmas card label sheets on the computer and hooray - I have finished the dreaded task !! Now I know how to use that software as well. I just have to get my cards organized. It seems to me that the most important thing is to send cards and some little pieces of news to people that are far away like Brazil and Iceland and of course Ireland.

I won't need to send one to my friend Susan Carlyle from Australia this year because she is here somewhere in the UK. I have unfortunately lost her current email through the last computer crash where I lost all my email from January to September of this year. So until she gets in touch - I don't know how or where to contact her .
I have not made cards for quite a few years maybe that will be something to aim for, for next year. However those that I do send will be Christmas cards that support charitable organizations otherwise it's just pointless. I feel this way, because a lot of what goes on at Christmas is utterly consumerist driven - it really pishes me off.

Thats a new phrase which I have kind of picked up here in Scotland and I like it - it's a little less vulgar than the raw phrase and always makes me think of Sean Connory in his role as James Bond.

The print image as seen here is by artist printmaker Sandra Baxter, who as far as I am aware, does not have a website which is a shame because she does some lovely etchings of all kinds of beautiful creatures. They really are stunning and beautiful in their mark making qualities.
The photo was very kindly taken for me by Bill Douglas who is a photographer for the Dundee Courier.
Posted by Aine Scannell at Thursday, December 13, 2007