H is for Happy

Why because a gallery "Print Space Dundee" at 3 High Street Newport on Tay  who represents my work, phoned to tell me, that one of my artworks had just been sold. 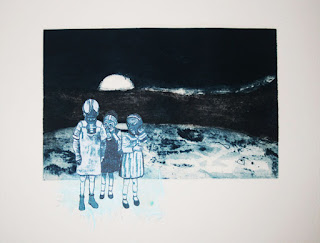 Funnily enough it was this one - which I wrote about in the previous post.  An American guy came in and purchased it as a gift for his brother.

I wonder if the guy has a family children because the "space" that is referred to isn't necessarily another planet.....far more likely its planet Earth.  The word Earth developed from a wide variety of Middle English forms, which derived from an Old English noun most often spelled eorðe.
(from Wikipedia)
Posted by Aine Scannell at Saturday, April 13, 2019