O is for Omdahl Elisabeth (artist printmaker from Norway) 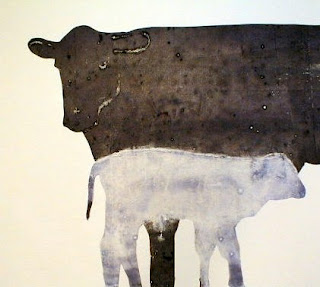 Oh Elisabeth......she is an artist whose work I have long admired.  I first encountered her art on a Face book group called "I Love Printmaking".  That was in the early days of Face book and well just using the Internet really.
I believe the first image I saw, was "Mor og Sonn" Mother and son, which to my mind is exquisite, tender and just perfect really. I believe it, (this image on the left) was printed with water based inks from cut vinyl. 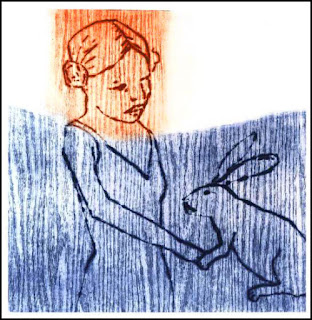 As for technique Elisabeth uses whatever method seems to work with reference to the nature of the work.

During the time I was more in contact with her I can remember her using lithography, gum Arabic transfer, dry point, etching, woodcut and lino cut.  I don't remember her doing any screen print but I bet she has done some.!  Oh and she uses pigment ink jet/ digital print sometimes. 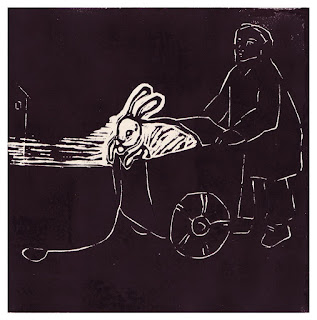 One thing I am quite certain of, and that is that, when Elisabeth wishes to focus on any drawing or ink wash drawing and so forth -she is quite capable of creating a larger print making based artwork which she might then interplay with other 'elements' from her rich vocabulary of visual forms and or metaphors.    Over the years it became clear to me that she is very knowledgeable within the various  printmaking techniques. 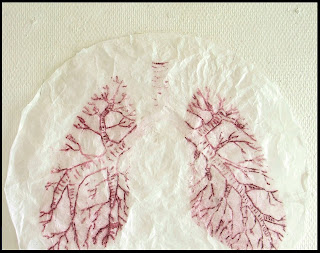 I love the 'delicacy' of this piece which is concerned with the concept of "breathing" reflecting the incredible complexity that is our mechanism for breathing.  It may also have been used in the sense of our hidden modus operandi for purely surviving....almost as if we are doing so.... almost in secret.

I am not completely certain but it maybe printed onto Japanese Washi paper. 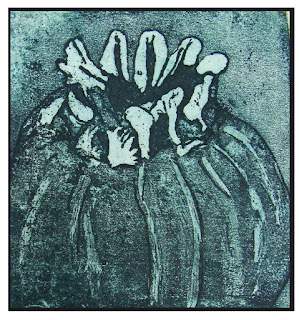 
As with many other but certainly not all  artists Elisabeth works in her studio using materials and methods or processes that are the 'least toxic', that they can be.


Copper sulphate etching, sometimes known as 'salt etch' is such a replacement or 'alternative' to the more harmful "nitric acid" its predecessor,
which is still being used in some places. 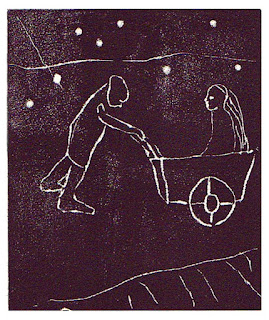 What I love about the idiosyncratic nature of this image is that it is printed using Styrofoam.  It just goes to show that basic craft materials can still be used to make 'sophisticated' outcomes.....it's about the nature of the drawn images from the hand of the artist.

An image such as this (and the other black ink relief cut print) which is the 4th image down from the top, puts me in mind of people such as Hieronymus Bosch and Pieter Bruegel. 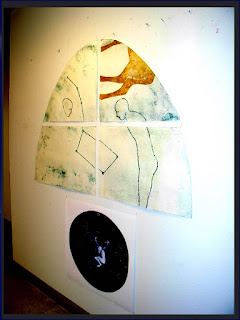 In this photo which I think was taken at Elisabeth's studio, I get the feeling that what she was doing was thinking through the ways in which she wanted the artworks to be displayed in the exhibition(gallery) space.

I love how she has arranged the figure and "The Big Dipper" or is it "`The Little Dipper".......but what I think is particularly effective is how she has the picture 'carved' into four 'sections'.

The ark-ed shape of the two upper sections emphasising directionally towards the night-sky, an open field of symbols and metaphors where emotion and experience overlap in what  Gaston Bachelard might have referred to as "The Poetics of Space" in his book of that same title.  His book explored the meaning of spaces to the 'self' or individual,  be they rooms, chambers or indeed wide-open-spaces such as the night sky. 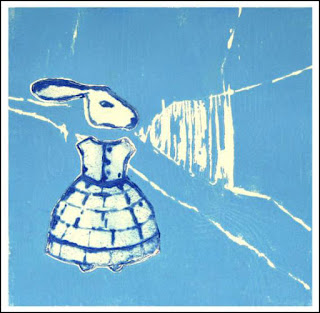 This dress and rabbit image which I believe is made using dry point and relief print.  What an exquisite blue.  As I referred to above, an image such as this might refer to a very subtle recollection of an experience where a child had the sense of a beautiful vibrant blue colour room where there was a delightful garment perhaps a dress or even a doll or a person.

The rabbit or hare might represent the idea of rebirth or there is also the possibility  that it alludes to the sensuality an innocent child experiences although that would generally be on an unconscious level.   Having said these things ..none of them may apply what so ever. 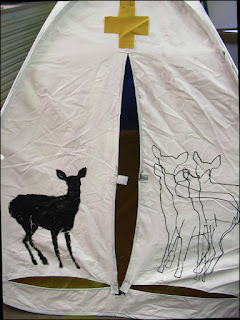 I believe Elisabeth was working out some ideas to do with an installation for an exhibition when this photo was taken.  Oh I remember now.... it was something to do with refugees. 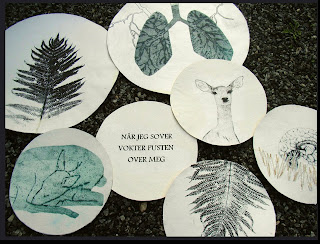 I believe that this is photograph of 'parts' towards an installation that Elisabeth was working on.  Such beautiful pieces representing lungs, words animals and plant forms. Oh and over time, I came to realise that this artist is one, who  also has "green fingers" and loves her garden. 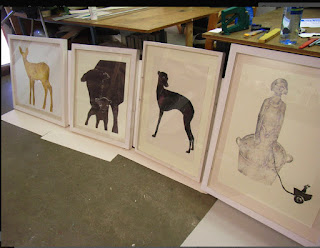 Framed and ready to go to exhibition. 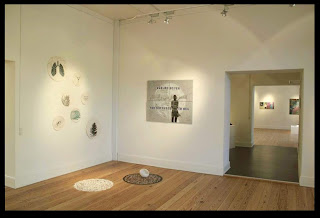 Works in an exhibition called "In Touch" in Norway.  Elisabeth has also had work in various exhibitions both solo and group throughout Europe.

Finally - to have to narrow-down to about a dozen images from so many lovely pieces of artwork has not been at all easy. None the less - it has also been a pleasure to  look through it and to think about what it is, about this artwork, that appeals to me and the ways in which it does that.......all of this via the many many documentary photographs of Elisabeth Omdahl's art process and studio practice with finished pieces, installations, artists books and so on...........  Thank you Elisabeth.