S is for Sirin

S is for Sirin 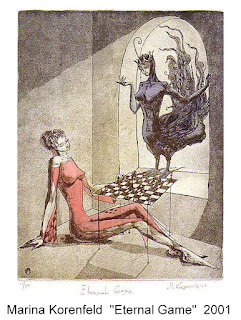 I came across this word a few days back whilst researching something else?  Anyway that word SIREN connected with my longstanding interest with the idea of mythological forms - and in particular- hybrids.

This image which is somewhat more recent than some of the images of Sirin I came across, is an etching with chine colle by Marina Korenfeld. 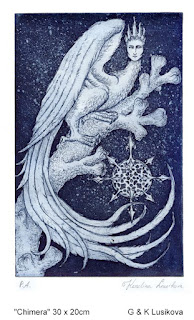 The “Sirin” I had come across was – the half-woman, half-bird creature originating from Russian mythology.  Of course some of you will also be familiar with another term for this kind of creature "Harpy".
Although I could have chosen from many images extant from Medieval times onwards  ……. I instead selected two contemporary printmakers both of whom were former USSR citizens.  Marina Korenfeld from Ukraine and Karolina Lusikova from Belarus 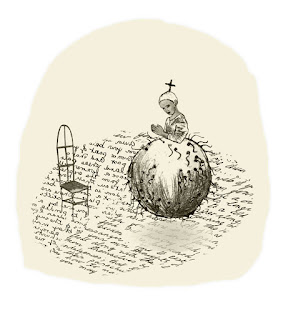 What I love most about the ideas of creatures such as SIRIN is that they are HYBRIDS. …and this was a concept I first encountered when I was about 11 yrs old.
At that time I remember making a book about Roman or Greek Mythology - possibly it was a combination of the two.  I think it was a self initiated project but whatever the original impetus I was so interested  and utterly enthralled with mythology.

I had a bit of a phase I went through where I seemed to want to write and create books. It has to be made clear that I was referencing physical books as this happened in the era before the internet.  Once a week my mother would take my brother and myself  to the main Library in Cork city. Of course the bigger the art books the heavier they were to carry but that was just one of those things you did. Once you got them home you could enjoy them.

Above:  image from one of my artists books made using a composite of trace monotypes and handwriting with some photoshop size: 30 x 20 cm 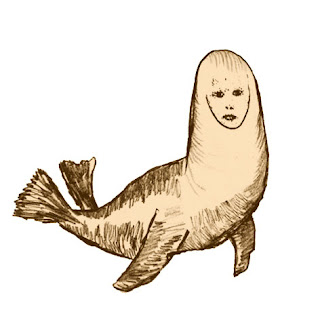 It was a treat and it was very quiet in there and the staff were friendly and what was really great was that from when I was aged 12, I could access the adult section so I could read and look at whatever I liked.
Mind you I wasn't in the know of anything particularly "adult" so I generally just loved being able to get large art books out with loads of big photos of art works in.  Being able to just do my own thing.  I have always loved books and reading.

Above: a sketch of a selkie that I first made a few years ago with trace monotype. 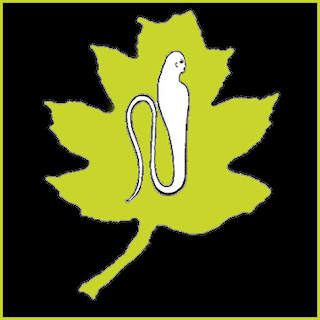 Getting back to Sirin and Hybrids of a mythological nature - oddly enough, the closest thing we have for a general word containing the meaning of 'half-human, half-animal' is Chimera.  which generally refers to a shapeshifter, chameleon like being.


The white image on the green leaf here is Echidna a half-woman, half-snake from Greek mythology


Well I absolutely still love creating hybrids within my own artwork. The insane thing is though, that when I encounter a fellow house resident watching a fictional TV drama such as a Zombie type weekly serial……I find it irksome as I can’t stand that kind of production.

This image is one of many used in a print series called "Animalia"(working title). One might posit that Zombies are mythological creatures but those tv dramas seem more about violence + there tends to be a 'lack of plot'. With contemporary animations using CAD generated animations - I tend to find the visual aesthetic pretty awful.  I ‘m afraid I just dont like these - preferring animations that have been created with a good amount of hand drawn material.

Above:  Sappho - my representation of Sappho for inclusion in an artists book project with a Polish artist, Anna Juchnowicz drypoint and chine colle 20 x 30 cm 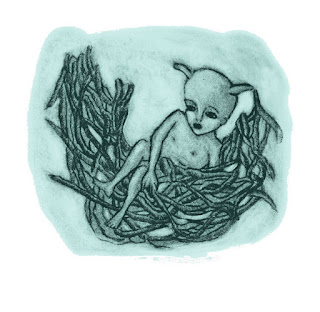 Another fantasy creature from Greek mythology is the Satyr, a hybrid of human and goat.  Unlike many hybrids the satyr is not considered to be dangerous—apart from the fact that its character is said to be mischievous and hedonistic. 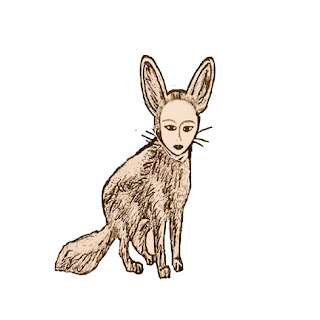 One might consider why it is that these hybrids continue to interest us.


Experts in the field of mythology and human behaviour such as the late Joseph Campbell have posited that  that these hybrid creatures are a form of archetype,  a way of people expressing their intrinsic love-hate relationship with that side of themselves that is 'animal' and that from which we originated.

Others would view them far less seriously, saying that these are stories and visual motifs that are just part of our cultural heritage.

Above:  I call her my little 'she fox' a drawing made ages ago.  She has yet make an appearance in one of my artworks.

Here is a link to a List of other hybrids in Mythology for further exploration.